Sterkfontein is a cave system that has been excavated by palaeontologists and archaeologists since 1936, when the first hominid fossil was found here. 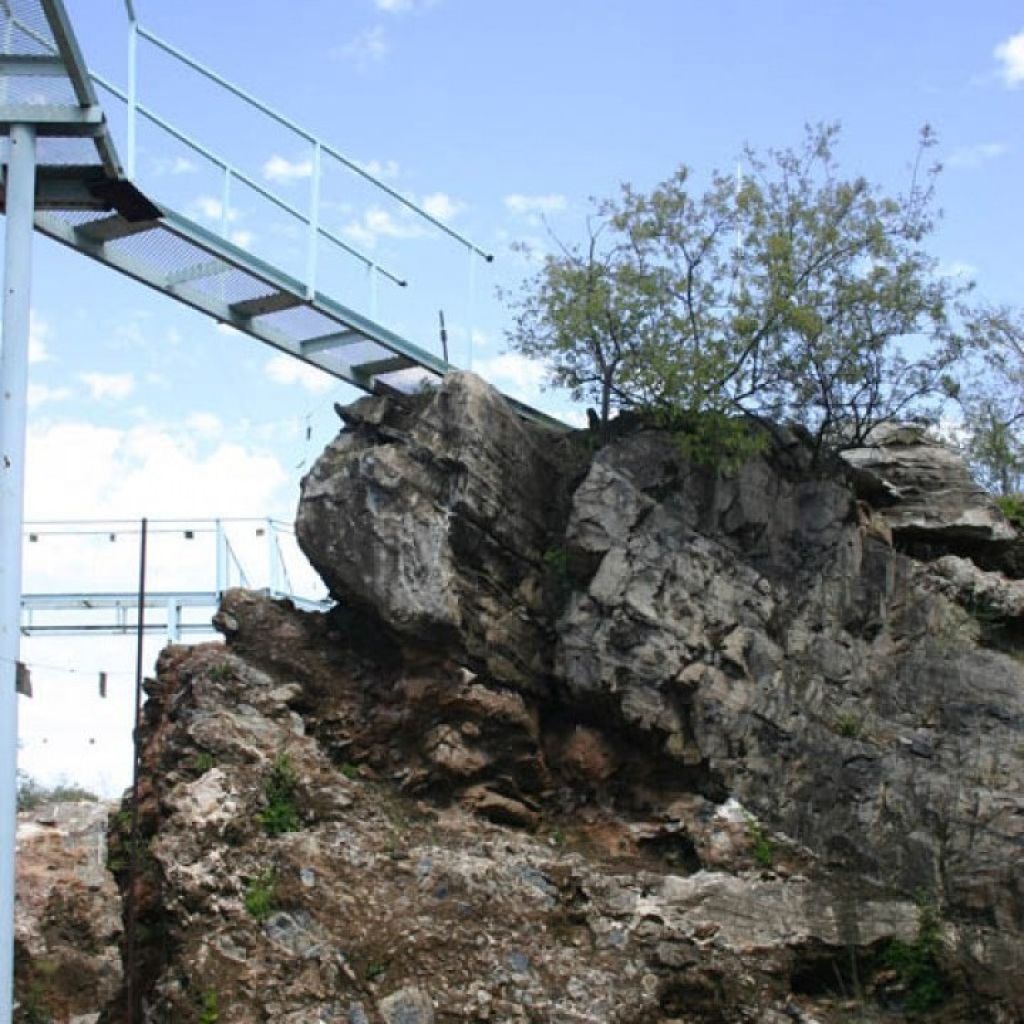 Palaeontologists’ skywalk at Sterfontein Caves, allowing them to criss-cross the area effectively

Palaeoanthropology is the scientific study of hominid fossils and their cultural material and origins. Sterkfontein is home to one of the world’s longest running palaeontological excavations.

Sterkfontein has produced some of the most famous hominid fossils in the world, together with a range of other fossils of animals and plants. The site has a very high concentration of fossils – the highest in the Cradle of Humankind – which, as a whole, has produced more fossils of early hominids than any other site on Earth.

Sterkfontein has also yielded stone artefacts that are up to almost 2-million years old, and are the oldest dated stone tools in Southern Africa.

Palaeontologist Dr Robert Broom began to recover fossils from lime mining activities at Sterkfontein in 1936. From 1945 onward, he and his colleague, John Robinson, used controlled explosions to extract more fossils.

In 1957, Dr CK “Bob” Brain of the Transvaal Museum found stone tools in a miners’ dump and Robinson and Revil Mason used a grid system to excavate in the stone tool area. This grid system enabled them to record the horizontal and vertical positions of the excavated fossils and artefacts.

Brain also discovered stone artefacts at Swartkrans that are between 1.7-million and 1.4-million years old, and are associated with remains of early Homo. In 1966, Ian Watt developed a greatly extended grid system, before Professor Phillip Tobias and Alun Hughes began their excavations.

Removing fossils from their resting places

Fossils and artefacts are extracted from the cave site by drilling and breaking the breccia. The breccia is then chipped away from the fossils and stone tools with small chisels and airscribes (a power tool used to separate fossils from rocks).

Areas of decalcified breccia (i.e. where the lime has been dissolved away by groundwater and the breccia has broken up) are excavated with picks and shovels and all the earth is sieved, so even small bones of rodents, insectivores, bats, lizards, frogs and birds can be recovered. Fragmented and crushed fossils can be reconstructed after cleaning.

Since 1966, work at Sterkfontein has been undertaken mostly by scientists from the University of the Witwatersrand, which owns the site. Excavations and dating have been conducted by Professor Phillip Tobias, Alun Hughes, Professor Ron Clarke, Dr Kathy Kuman, Professor Tim Partridge and others.

These scientists have used several methods to excavate fossils from the Sterkfontein caves and other sites in the Cradle of Humankind World Heritage Site.

How fossils are removed 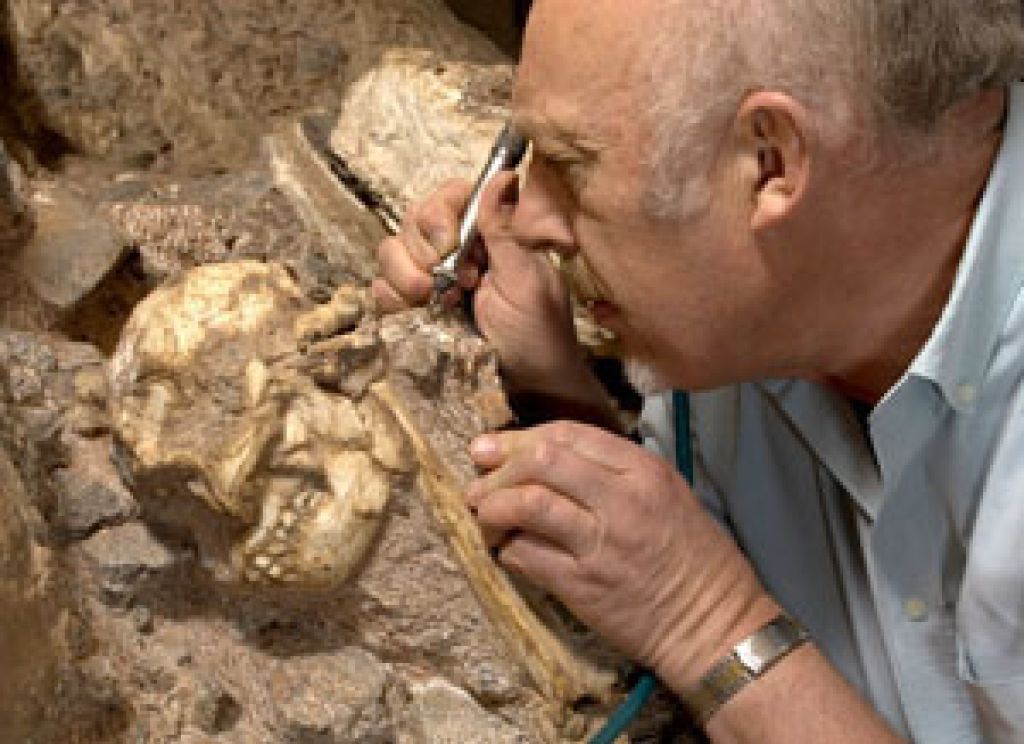 Fossils are carefully uncovered from the surrounding breccia with delicate airscribes. “Little Foot” has been excavated using airscribes, which operate using compressed air.

To remove overlying layers and expose cave breccia, jackhammers and crowbars can be used in situations where solid breccia has first to be broken open to expose fossils.

Decalcified sediments can be excavated with trowels. The sediments are sieved, and any bones and artefacts recovered go to a laboratory for analysis.

Blocks of breccia can be removed for preparation in a laboratory. Prior to removal, the position of each block of breccia is recorded in three dimensions, relative to a grid. Fossils can be prepared in a laboratory using small, pointed chisels and lightweight hammers. Fine cleaning of important fossils is done under a microscope with dental picks and airscribes.

Fossilised remains, such as microfauna (the bones of small mammals and bats), can also be released from calcified breccia by carefully soaking chunks of the rock in weak acetic acid. This dissolves the calcium carbonate matrix holding the delicate fossils.

How do palaeoanthropologists know how old their discoveries are?

Researchers use a number of techniques to date the cave deposits.

Palaeomagnetism is a method used to date deposits at Sterkfontein and other Cradle of Humankind sites. It is based on the fact that the Earth’s magnetic field has reversed at various, precisely known moments in the Earth’s history. Since electrically charged particles align themselves to the magnetic pole, scientists can determine age estimates of fossils by analysing in which direction particles at various points in the sediments are aligned. Recent work on sediments in Sterkfontein Member 4, including sediments associated directly with “Mrs Ples”, suggest that this fossil is about 2.1-million years old.

Uranium series dating relies on the analysis of the changing ratios of uranium and lead in the cave deposits. This dating method has been used at Sterkfontein to date infills and stalagmites.

Cosmogenic isotope dating involves analysis of isotopes of elements such as beryllium and aluminium. This method has been used to obtain a date of about 4.1-million years for the “Little Foot” skeleton, although palaeomagnetism dating places it slightly younger (about 3.3-million years ago).

Estimates of the age of hominids from the Cradle of Humankind can be obtained by comparing them and associated animal remains with similar fossils from East Africa that were found in association with volcanic ash deposits. The East African sediments can be dated accurately using techniques such as carbon dating, which entails the analysis of isotopes of radioactive potassium (K) and stable argon (Ar). The natural decay rate of the potassium isotopes relative to argon can be used as a measure of elapsed time. Unfortunately, this dating technique cannot be applied to South African fossils as they are not associated with volcanic materials. But by drawing comparisons, scientists believe that Member 5 from Sterkfontein, in which early Homo remains have been found, is between 1.5-million and 1.9-million years old, while Member 4 is slightly older. 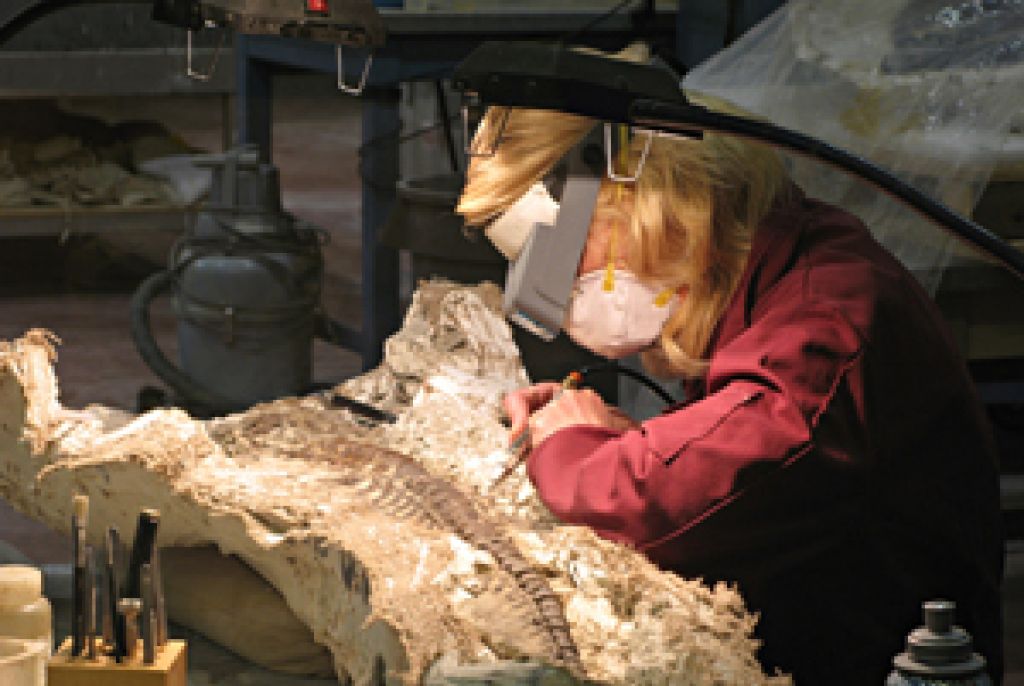 A palaeontologist at work in the laboratory

Specific ages of the different members of Sterkfontein are difficult to determine, as methods of dating and knowledge of contextual evidence are constantly being refined and updated. The University of the Witwatersrand’s Professor Tim Partridge, a world expert on the issue, explains: “A date obtained one month may be completely different to that calculated next month. We’re on the cutting edge of science, so things are bound to change all the time.”

At Sterkfontein, there are six Members (sedimentary units or layers) of rock, containing fossils dating between 4-million and 1.5-million years old, giving us an extraordinary timeline of fauna and flora development during the time of our hominid ancestors. The six members have been classified by the University of the Witwatersrand’s Professor Tim Partridge, a geologist and dating expert, from oldest to youngest.

Members 1, 2 and 3 are underground, in the Silberberg Grotto of Sterkfontein.

Members 4, 5 and 6 are visible from the surface.