Australopithecus, which means “southern ape”, was actually an upright-walking hominid with human-like teeth and hands. Its main ape-like features were a small brain, flattened nose region and forward-projecting jaws. Different species of this genus populated the eastern and southern parts of Africa between 4-million and 2-million years ago.

One genus, many species

There were many different species of the Australopithecus genus. More fossils of Australopithecus africanus, which lived between 3-million and 2-million years ago, have been found at the Cradle of Humankind than any other hominid species. 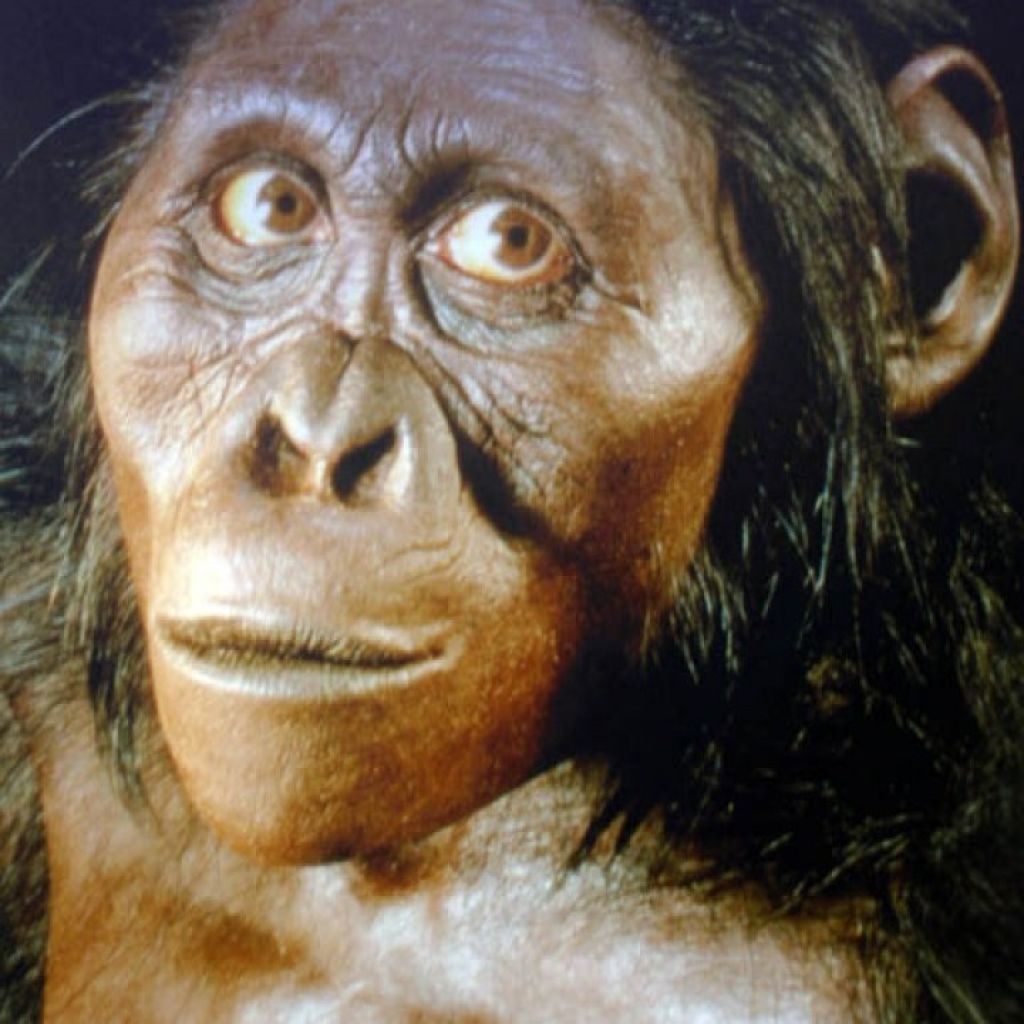 An artist's impression of Australopithecus

The first adult specimen of an Australopethicus was discovered in 1936 at Sterkfontein by palaeontologist and director of the Transvaal Museum, Dr Robert Broom.

Sts 5 (Mrs Ples), which he discovered in 1947, and many other specimens found in Sterkfontein Member 4, also belong to this species. These include the lesser known cranial specimens Sts 17 and Sts 52, and a partial skeleton, Sts 14, found in 1947, which had a complete pelvis that affirmed that Australopithecus was bipedal, or walked upright.

But there are other australopithecines discovered at the Sterkfontein Caves and at Makapans Valley, about 300 km (480 mi) from Sterkfontein, near Mokopane in Limpopo Province, which may not be Australopithecus africanus. These include several specimens, such as Stw 252, and Sts 71, discovered by Broom and his colleague, John Robinson, in 1947.

Palaeoanthropologist Professor Ron Clarke has argued that Stw 252 appears very different from Australopithecus africanus in that it has much larger teeth, a flatter upper face, a thinner brow region and a differently shaped braincase. He observed the same features in Sts 71, and suggested these, plus some other large-toothed hominids from Sterkfontein and the Makapans Valley, represent another Australopithecus which lived at the same time as Australopithecus africanus. This second species is yet to be named.

“Little Foot”, which is still being excavated from Sterkfontein Member 2, is one of the oldest australopithecines ever found, dating to between 4.1-million and 3.3-million years old, according to palaeomagnetic evidence and cosmogenic isotope dating. The species to which the skeleton belongs will only be determined when it has been completely extracted from the rock in which it lies embedded. Other hominid remains dating to a similar time have also been recovered from the Jacovec Cavern at Sterkfontein.

One Saturday in 1924, a young scientist, Dr Raymond Dart, an

Australian by birth who studied in England and had come out to South Africa as head of the University of the Witwatersrand’s Department of Anatomy, received two large wooden boxes containing fossils at the door of his house, just as he was preparing to attend a wedding. 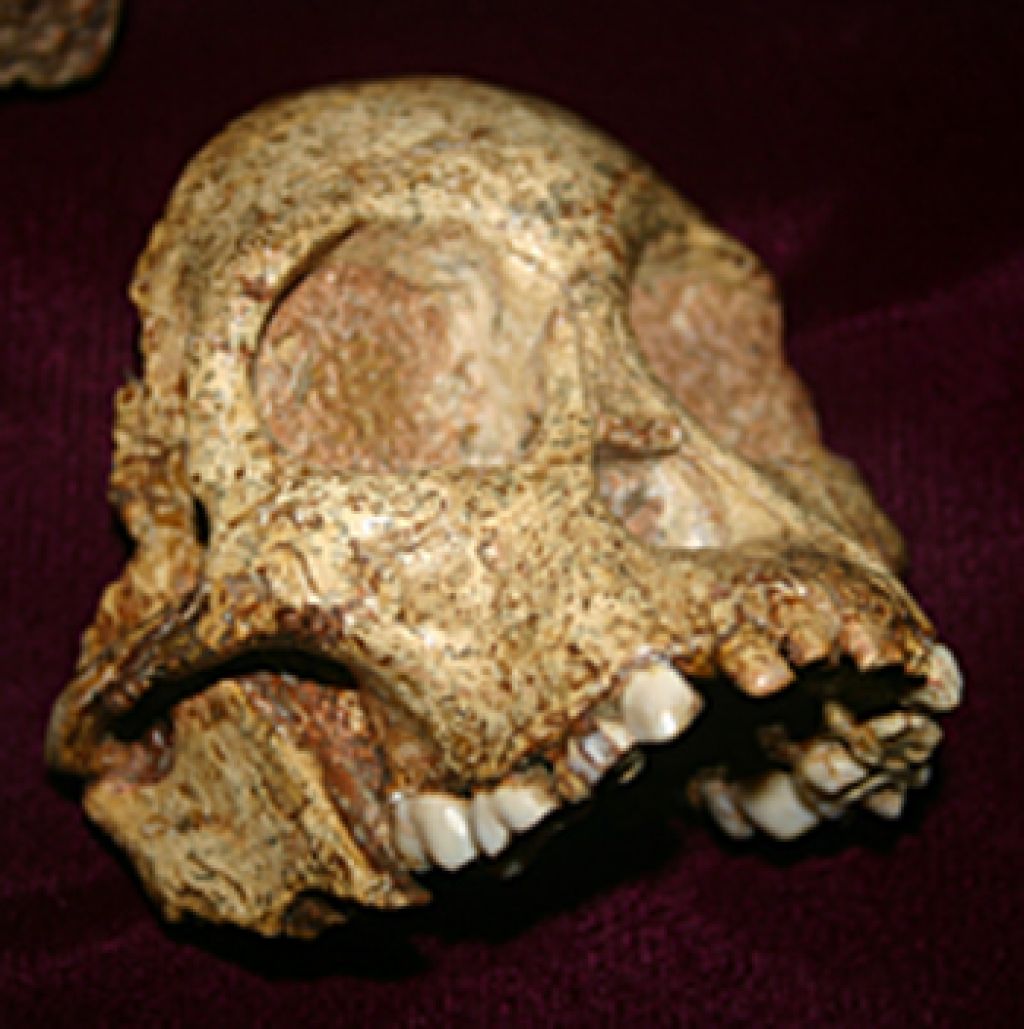 Fossil of the Taung child

The fossils had been sent by his geologist colleague, Professor RB Young, from the Buxton Limeworks in the small town of Taung, about 150 km (95 mi) from Kimberley, in what is now the North West Province of South Africa and which now forms a part of the Cradle of Humankind World Heritage Site.

When he removed the lid from the second box, Dart was amazed to see the fossilised cast of a tiny brain on top of the pile. It belonged to the Taung Child, and was to become one of the most remarkable scientific discoveries ever made.

Dart wrote of the moment in his book, Adventures with the Missing Link:
“On the very top of the rock heap was what was undoubtedly an endocranial cast or mould of the interior of the skull. Had it been only the fossilised brain cast of any species of ape it would have ranked as a great discovery, for such a thing had never before been reported. But I knew at a glance that what lay in my hands was no ordinary anthropoidal brain. Here in lime-consolidated sand was the replica of a brain three times as large as that of a baboon and considerably bigger than that of an adult chimpanzee.”

For three months, Dart scratched the skull from its rocky matrix using his wife’s sharpened knitting needles. Two days before Christmas, he finally freed the child from the rock.

He later wrote: “I doubt if there was any parent prouder of his offspring than I was of my Taung baby that Christmas of 1924.”

The Taung Skull – small enough to fit in the palm of a hand – was that of a three or four-year-old child, and much smaller than a modern human of the same age. It had small canine teeth, and the position of the foramen magnum, where the spine joins the base of the skull, showed it walked upright – two distinct differences from true apes.

Early in 1925, Dart described the find in the journal Nature, and so identified and named not only a new genus and species, but also an as yet unknown human ancestor. Before this, the only human ancestors known to science had been the Neanderthals of Europe and the fossils of Homo erectus found in Java, Indonesia. Dart called his find Australopithecus africanus.

The reaction to the discovery was far from congratulatory or excited. Dart was vilified for daring to suggest that humankind could have originated in Africa. Most scientists at the time thought humanity had been born in Asia or Europe, particularly after the discovery of the “Piltdown Man” in England in 1912, which was later exposed as a hoax. Not many people believed Dart until the 1940s and 1950s, when hominid fossils from the Cradle of Humankind in South Africa started to swing the balance of probability that humankind had, in fact, originated in Africa.

Dart’s student and successor, Professor Phillip Tobias, remarked of Dart’s find:
“With brilliant insight and no small courage, he made a giant intellectual leap and concluded that it was neither ape nor human but a ‘missing link’ in the old-time Chain of Being. He named it Australopithecus africanus (‘southern ape of Africa’). It was an ape which had undergone some crucial evolutionary changes in a human direction. Knocking on the door of humanity, it had not crossed the threshold.”

An artist's impression of Mrs Ples

Mrs Ples was born over 2-million years ago, and lived and died in the Cradle of Humankind. In 1947, palaeontologists Dr Robert Broom and John Robinson discovered her skull encased in breccia in the Sterkfontein Caves. Their find helped to highlight the view that humankind originated in Africa – something which most scientists were sceptical of at the time.

The Star newspaper of Johannesburg gave Mrs Ples her name, after Broom stated the skull was a female of a species called Plesianthropus transvaalensis “near-human from the Transvaal”, although she was later identified as belonging to the same species as the Taung Child, Australopithecus africanus.

Mrs Ples remains one of the most complete skulls of this species ever uncovered. Her fame has been mingled with controversy – Dr Francis Thackeray of the Transvaal Museum has argued that Mrs Ples is, in fact, the fossil of a young male. He has also maintained that a few skeletal parts found at roughly the same time close to the skull may also have belonged to Mrs Ples, though not all palaeoanthropologists agree with this view.

The hypothesis that Mrs Ples was a male is based in part on ridges on the face (anterior pillars) of the kind that are usually found in male specimens of Australopithecus africanus. If she were in fact male, Mrs Ples would have been relatively small. The fact that Mrs Ples was an adolescent is indicated by the open roots of wisdom teeth that have been recognised from X-ray analysis (CT scans) of the fossil.

Mrs Ples was clearly on the road to humanity. She could walk upright, but had a smaller brain, similar in size to that of a modern chimpanzee. Some researchers believe that humans and chimpanzees had a common ancestor, which lived in Africa about 8-million years ago, while others consider there is a closer relationship with orangutans. But at about 2-million years old, Mrs Ples is more closely related to humans than to modern apes.

How the first adult australopithecine was found

Dr Robert Broom, a renowned palaeontologist and head of the Transvaal Museum, supported Prof Raymond Dart’s hypothesis that the Taung Child was a hominid, even when it was unpopular to do so. He dreamed of finding an adult australopithecine, and went looking in dolomite caves west of Pretoria, where he discovered instead the fossil of a giant baboon, which received considerable press coverage. 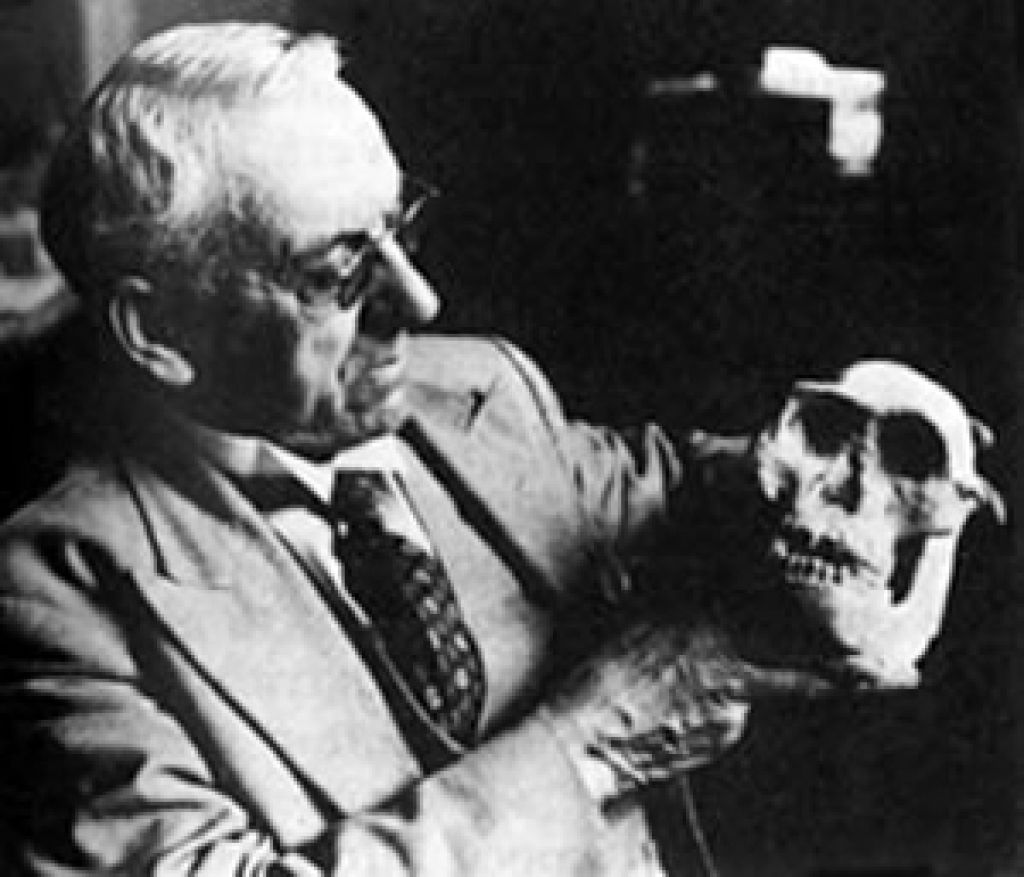 After reading about this in a newspaper, two of Dart’s students, Harding le Riche and GW Schepers, who had found fossil monkey skulls at Sterkfontein, took Broom to the caves.

Here, Broom met George Barlow, the site manager, who, as luck would have it, had also worked at Taung, where the first Australopithecus, the Taung Child, had been found. Broom asked Barlow to keep an eye out for anything similar to the Taung Skull, and a few days later, Barlow handed him a rare find: the world’s first adult specimen of Australopithecus, later catalogued as TM1511.

In his 1950 book, Finding the Missing Link, palaeontologist Dr Robert Broom described the moment when he saw the first adult australopithecine that had ever been found:

“On the Monday following, August 17th, 1936, I was again at Sterkfontein and when I saw Barlow, he handed me a beautiful brain-cast and said ‘Is this what you’re after?’… It was clearly the anterior two-thirds of a brain-cast of an anthropoid ape or ape-man, and in perfect condition. It had been blasted out that morning. I hunted for some hours for further remains, but without success. But I found the natural cast of the top of the skull in the side of the quarry and had this carefully cut out… Next day I was back and discovered the base of the skull on which the brain-cast had rested, with all the blocks that had been attached to it… To have started to look for an adult skull of Australopithecus and to have found an adult of at least an allied form in about three months was a record… And to have gone to Sterkfontein and found what we wanted within nine days was even better.”

Read about the exciting find of the Little Foot skeleton, an Australopithecus, deep inside the Sterkfontein Caves.