The caves at Sterkfontein were formed in dolomitic limestone over millions of years. They began to form as early as 20-million years ago. Most caves including Sterkfontein – are formed by the dissolving action of weakly acidic rainwater, which seeps into the soluble rock through the soil.

In ancient Neoarchaen times, 2.58-billion years ago, dolomite formed in the bed of a shallow sea. Within the last 20-million years, the Sterkfontein Caves were formed within the dolomitic rock. Slightly acidic groundwater dissolved solution cavities beneath the water table. This zone beneath the groundwater surface or water table is known as the phreatic zone. Over time, the water table dropped and the caves became air-filled voids in which stalactites and stalagmites could form. Water from the surface percolating through cracks in the dolomite absorbed calcium carbonate. On reaching the cavern ceiling, carbon dioxide was released, and a thin film of calcium carbonate was deposited. The deposits built up over time to form stalactites and other formations. 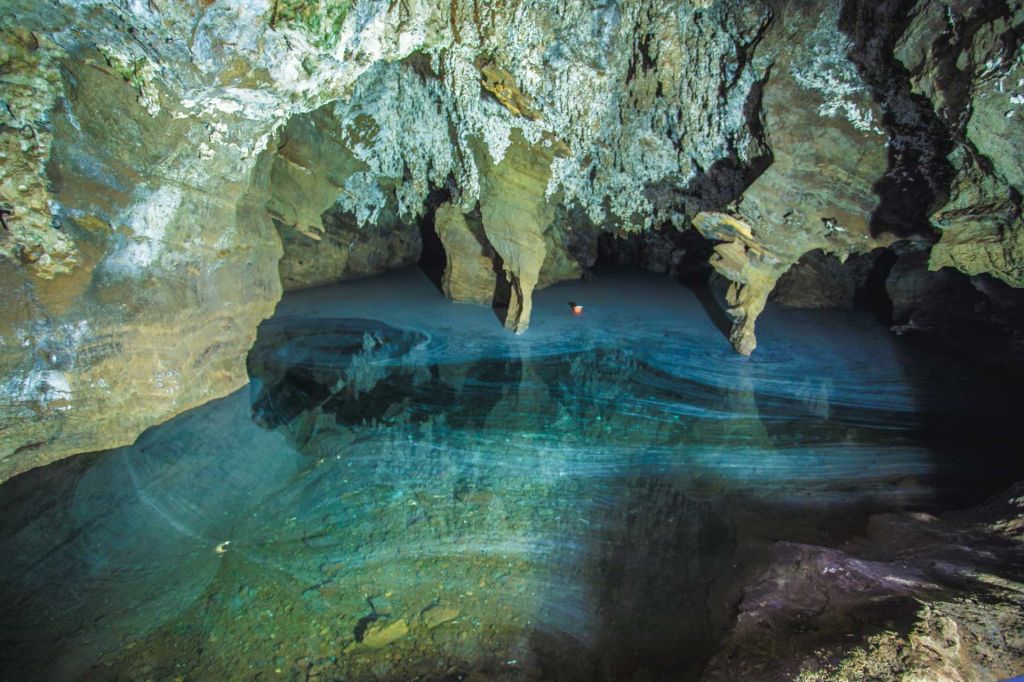 Underground lake in the Sterkfontein Caves

The term stalactite comes from the Greek word stalaktos, which means “dripping”, because these other-worldly formations are produced by “drips” from the ceilings of limestone caves. Water reacts with chemical elements in the ground and rock, and seeps slowly through the roof of the cave, depositing calcium carbonate, which hardens and builds up over time to form a stalactite.

Stalagmites are corresponding formations on the floors of caves, rising up over time as drops of water, rich in calcium carbonate, fall from the roof of the cave. The term stalagmite comes from the Greek word, stalagma, to “drop”.

How to remember the difference

Bones and breccia in caves

Solution and roof collapse created entrances to the caves in the form of vertical shafts. Soil, rocks, bones and vegetation fell in from the surface – the animals and plants from which fossils formed did not actually live in the caves.