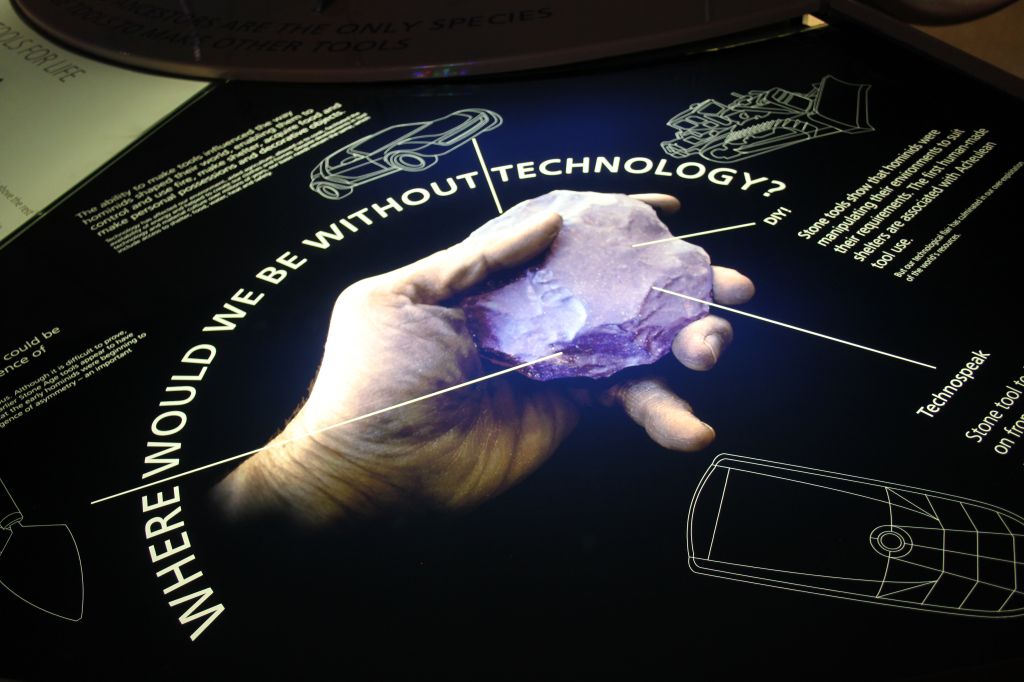 Humans and our hominid ancestors are the only species that are able to use tools to make other tools.

Where would we be without technology?

The ability to make tools influenced the way hominids shaped their world, enabling them to control and use fire, make shelter, acquire food and make personal possessions and decorative objects.

Technology has affected our environment, aided agriculture, allowed us to cook, facilitated the availability of energy and helped to create our clothes and homes. Despite developments in tool technology and material culture over millions of years, our basic needs remain the same, which include access to shelter, food, water, heat and safety.

The development of tools could be connected to the emergence of “handedness”.

Most apes are assumed to be ambidextrous. Although it is difficult to prove, the toolmakers who produced certain Earlier Stone Age tools appear to have been right-handed. This could mean that the early hominids were beginning to reorganise their brains, with the emergence of asymmetry – an important factor in evolution.

Stone tools show that hominids were manipulating their environments to suit their requirements. The first human-made shelters are associated with Acheulean tool use.

But our technological flair has culminated in our over-exploitation of the world’s resources.

Stone tool technologies had to be passed on from generation to generation.

The mere development of a tool – planning and thinking through a sequence of steps, which is similar to composing sentences – may have helped to develop language. There may also be a link between the complexity and standardisation of tools and the use of language at the time.

Between 3-million and 2.6-million years ago, hominids began displaying a trait different to any other animal. They began to chip away at stones, using other stones, to make tools with sharp edges: manufacturing had begun.

Millions of these chipped stones, and the flakes they produced, are lying strewn across Africa.

Cut above the rest

Tool technology enabled hominids to enhance their diet. They were able to break open bone to extract marrow or process tough vegetation.

They were also able to cut branches and sharpen sticks. The use of digging sticks enabled our ancestors to gather nutritious underground foods such as tubers.

At Olduvai Gorge in Tanzania and at Swartkrans in the Cradle of Humankind, cut marks made by stone tools on animal bone have been discovered. But tooth marks on the bones indicate that they were chewed on first by carnivores. This could mean that tools were used on scavenged carcasses, although the interpretation of such damage to bone is difficult. 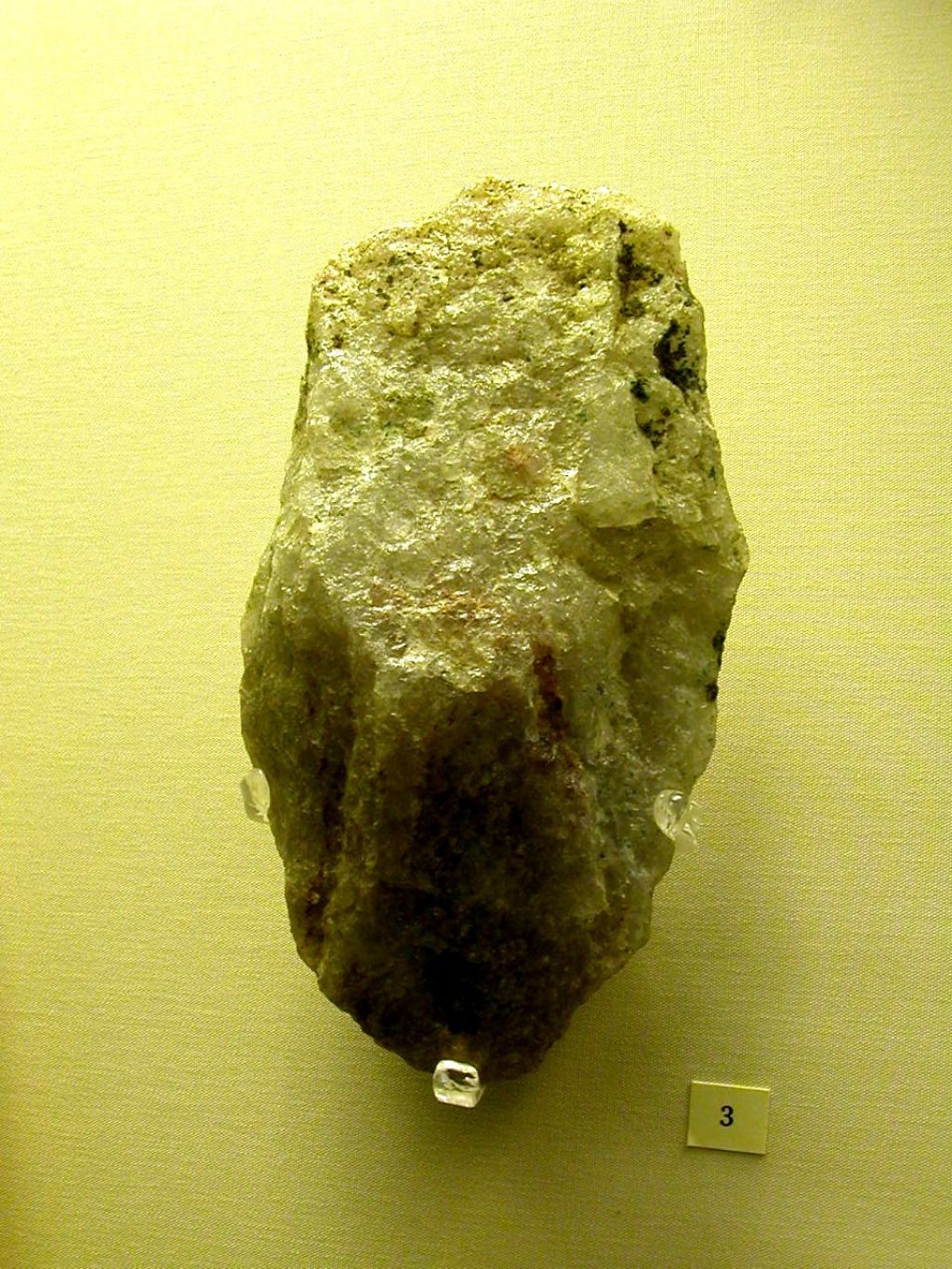 The oldest known stone tools are from Gona in Ethiopia and were made about 2.6-million years ago, probably by early Homo.

The earliest stone tools were mostly small quartz or lava pebbles that were shattered to create sharp-edged implements.

These implements are called Oldowan tools, after Olduvai Gorge in Tanzania, where they were first discovered. Oldowan tools include both chopper-like core tools, useful for breaking bone to extract marrow and possibly working wood, and simple flakes suitable for various butchery tasks.

Core tools were made from the rock cores off which stone flakes were struck. Over time, our ancestors preferred to use the flakes for tools.

Hominids chose their materials carefully, selecting suitable rock types for making stone artefacts. Volcanic rock was used in East Africa, while quartz, quartzite and chert were the most popular materials for stone tools in the Cradle of Humankind. Quartz is brittle but sharp and crystalline, and can be fractured easily.

In the Oldowan industry there is no evidence yet of hominids flaking regularly to predetermined patterns. Choosing the right material reflects an awareness of the properties of locally available rocks.

Many animals use or modify objects to accomplish tasks. For example, sea otters can break mollusc shells with rocks, and birds can use twigs or palm fronds to build nests. Chimpanzees and capuchin monkeys modify grass stems to poke termites from mounds, and can use stones to crack open nuts.

Early hominids could have displayed similar kinds of behaviour, using naturally broken pieces of rock as tools. The earliest stone tools used by our hominid ancestors may be indistinguishable from natural rocks.

In a transition technology between the Acheulean and the Middle Stone Age, early Homo sapiens used the Levallois technique, named after flint tools found in the suburb of Levallois-Perret in Paris, France.

This technique was used to create many flakes of predetermined size and shape by carefully preparing the core first to make tools for specific purposes. The origins of this technique, and of blade and point production, can be traced back to hand-axe times.

There is also evidence of the use of bone tools and engraved imagery in the Middle Stone Age.

Acheulean stone tool technology was developed by Homo ergaster about 1.7-million years ago.

The technology is named after St Acheul in France where flint hand-axes were found by Boucher de Perthes in the 1830s and 1840s.

The Acheulean tools Homo ergaster made were relatively large and included handaxes, picks and cleavers, all of which they flaked on at least two faces (hence the term bifacial). 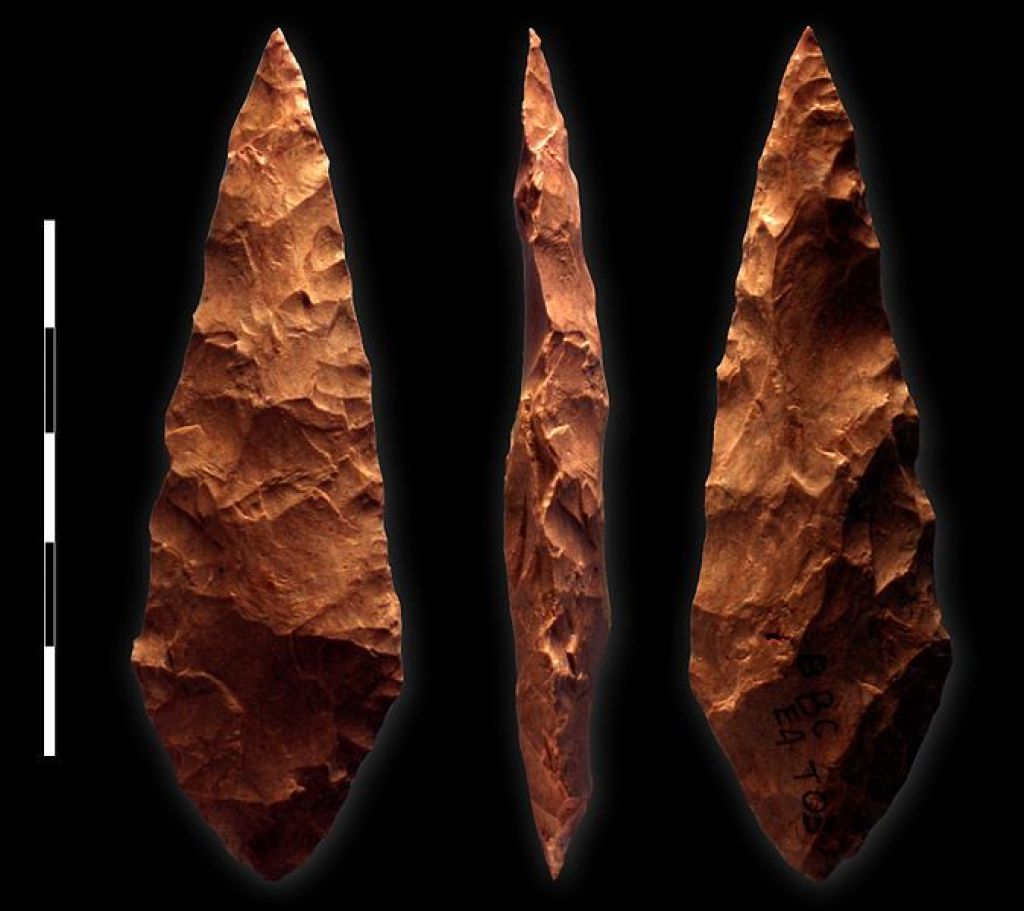 Acheulean hand-axes were probably used for many purposes. They may have been used as butchery tools or heavy duty knives. They are efficient at slicing tough hide and for working wood. They have been described as the “all-in-one tool” of the Earlier Stone Age in Africa.

Blombos is an important site near Stilbaai in the Southern Cape in South Africa where objects like an engraved rock have been discovered, from deposits dating back 77,000 years.

At this stage humans were beginning to learn how to craft small flakes, points and blades as part of composite tools, such as the tip of a spear.

As the final major advancement in stone technology, in what is referred to as the Later Stone Age, the manufacture of microliths (tiny stone tools) reflects a shift in human thinking towards designing composite tools for a range of specific tasks such as arrowheads and cutting tools.

In South Africa, Later Stone Age technology developed about 40,000 years ago and was used up until historical times. Rock art also mostly dates to the Later Stone Age.