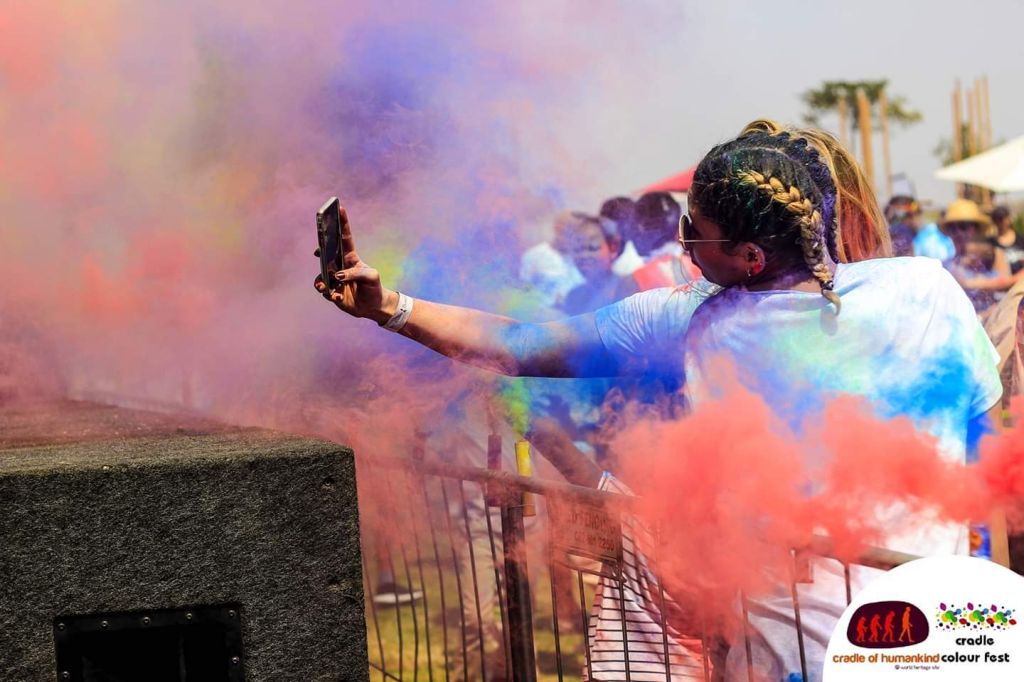 It’s that time of year again, when the dry grasses of the Cradle of Humankind slowly start to turn green and we start to feel that irrepressible energy of spring. It’s also the time of year when South Africans ponder our collective and individual identities during Heritage Month.

At Maropeng, we started a new tradition last year to celebrate both the vivid colours of spring and the rich diversity of South Africa.

It’s called the Cradle Colour Fest and this year it’s happening on 28 September. The Cradle Colour Fest is a one-day music festival held at our beautiful Stone Park that features a star-studded line-up of local musicians. Festivalgoers can spend the day dancing, chilling out on the grass or throwing colourful powder at each other, in the air and on themselves.

Read more about some of the artists below.

Sho Madjozi, who hails from Shirley Village in Limpopo, has released tracks with DJ Maphorisa, Khuli Chana, Ghanaian artist Wanlov, Ms Cosmo and others. She is perhaps best known for her single, Dumi Hi Phone. The song reached the number one spot on Yfm, and has been in the top 10 songs featured on a number of national radio stations, including Metro FM. Sho Madjozi has also played some of the biggest shows in the country, including Fill Up FNB Stadium, Afropunk and Castle Lite Unlocks.

DJ Dino Bravo, born Vladmir Miguel Bravo Jose, was born in Cuba, raised in Angola and moved to South Africa in the early 90’s. His earliest musical introduction was through break-dancing and rapping as a youngster. He is best known for his astonishing mixes on Yfm and 5fm, where he gained legions of fans. He has played all over the world from Dubai to Switzerland to Mauritius and India.

Nariska Zietsman is an indie singer/songwriter from Pretoria. She was a crowd favourite at last year’s Cradle Colour Festival. This up-and-coming artist, who is releasing her first album at the end of this year, specialises in live acoustic performances.

Ms Jones is a DJ, producer and entrepreneur. Born Tebogo Siyaphi, this West Rand artist has been in the music industry since 2007, when she started playing vinyl and had her mixes featured on radio stations such as Metro FM, Yfm, Ikwekwezi FM, Ligwalagwala FM, Lesedi FM and Motsweding FM.

African Rhythm is a group of 11 young musicians who began their collaboration busking on the streets of Johannesburg. When a YouTube video of their talent went viral, they found themselves featured on the SABC, on CNN and on other media platforms.

”We play real instruments and we play them well,” they write in their bio.

Excited? Well, tickets for the festival cost R150 per adult, and R80 for children (12 years and younger). All food and drinks will be sold on site. Remember, it’s a cashless environment, so pay with your card and don’t worry about carrying around cash.

Gates open at 10am, and the festivities are expected to wrap up around 6pm.

“This is going to be a day for every individual to celebrate who they are,” says Maropeng MD Michael Worsnip.

”Come and listen to wonderful music, enjoy fantastic food and revel in a spectacular feast of colour, our heritage and our uniqueness. The Cradle Colour Fest has something for everyone.”

Book your tickets for the 2019 Cradle Colour Festival