There's an old Carl Sagan quote that has gained popularity over the years, and one you've probably come across before on this very blog: “The cosmos is within us. We are made of star-stuff.”

The idea has entered the popular imagination – from R&B songwriter The Weeknd calling himself a “starboy” to the latest Star Wars film's main character's nickname being Stardust, it's a concept that has become familiar. 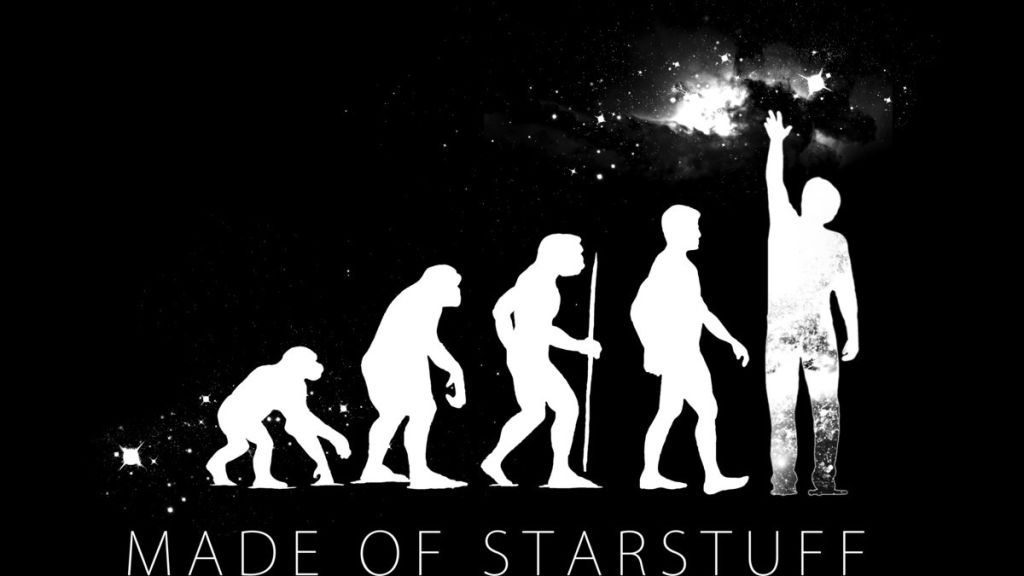 This popular Sagan quote is even available on T-shirts. (Image: jimiyo)

What is less familiar is exactly how we are related to giant balls of gas, billions of kilometres away in the cold vacuum of space.

Ingredients for making a human

Humans, and a lot of other living things here on planet Earth, are essentially made up of the following elements: carbon, hydrogen, nitrogen, oxygen, sulphur and phosphorus. Those elements make up about 97% of the mass of a human body, with traces of other elements – including gold – making up the remainder.

These basic building materials were present on primordial Earth billions of years ago, and allowed complex life forms to grow and evolve, and eventually to read blog posts like this.

Those elements were cooked up in the heart of exploding stars. At first, a star burns through its supply of hydrogen, converting it into helium through nuclear fusion. As it gets older and hotter, it starts to produce heavier and heavier elements, including carbon and oxygen.

At the end of a star's life, it explodes, scattering its guts across space. These clouds of “star-stuff” eventually come together to form new stars and planets, and in at least one case, life.

Astronomer Jennifer Johnson has published a new version of the periodic table of the elements – but unlike your drab school version, this one illustrates where the elements actually originated. It's fascinating: 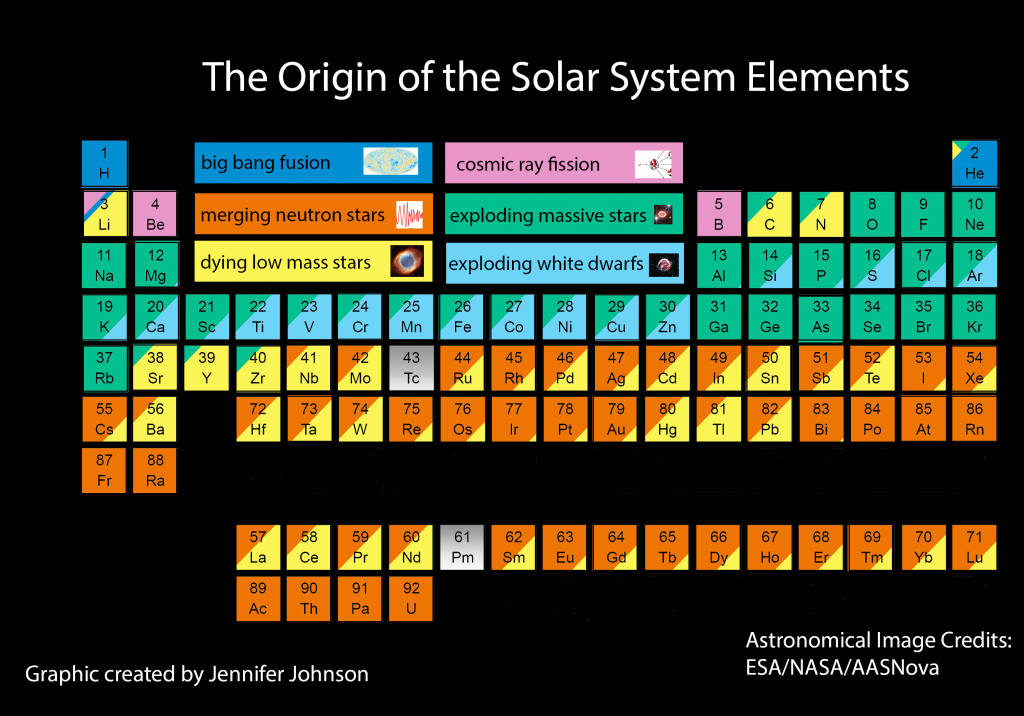 Read about the table and see a bigger version here. (Image: Jennifer Johnson)

Astronomers in the Sloan Digital Sky Survey have just released the results of their study of nearly 200 000 nearby stars in the Milky Way. They have been using a spectroscope to determine what each star is made of. The spectroscope splits the light emitted from each star like a glass prism does. Astronomers can then look at the detailed rainbow pattern it creates, and determine what's inside the star. Each chemical element leaves a different fingerprint in the emitted light, and that's how we know how much of each element is inside a star. 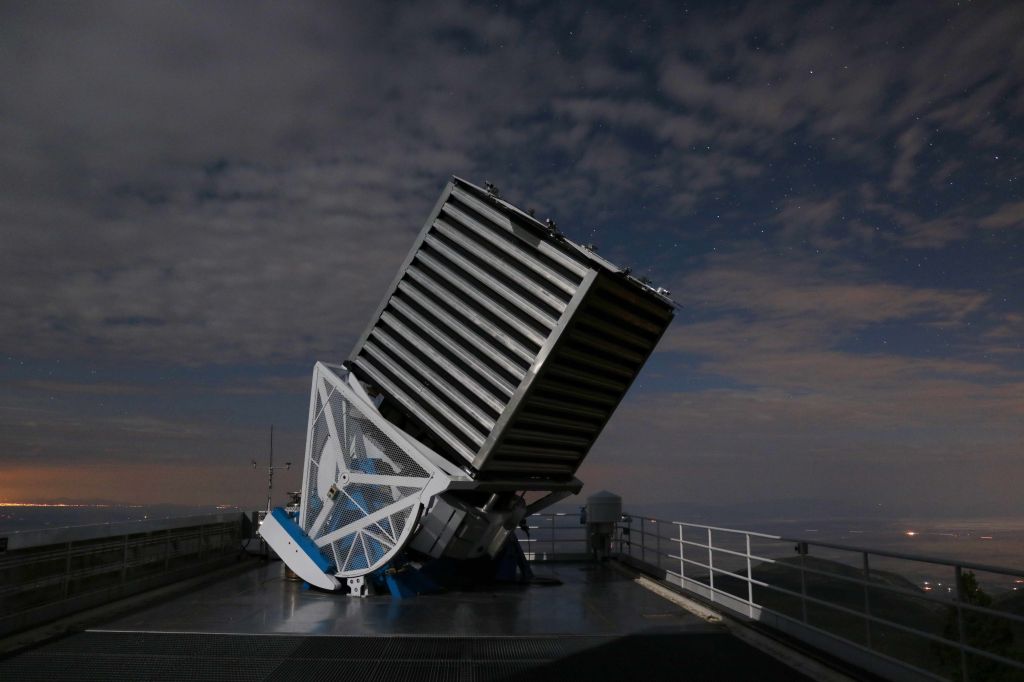 The study reveals that the heavier elements like carbon and oxygen are more abundant nearer to the centre of our galaxy, where the stars tend to be older. So, these ingredients for life (as we know it) have been around in the inner galaxy for longer than they have in the outer parts. Our own star, the Sun, is located in one of the spiral arms somewhere in between. 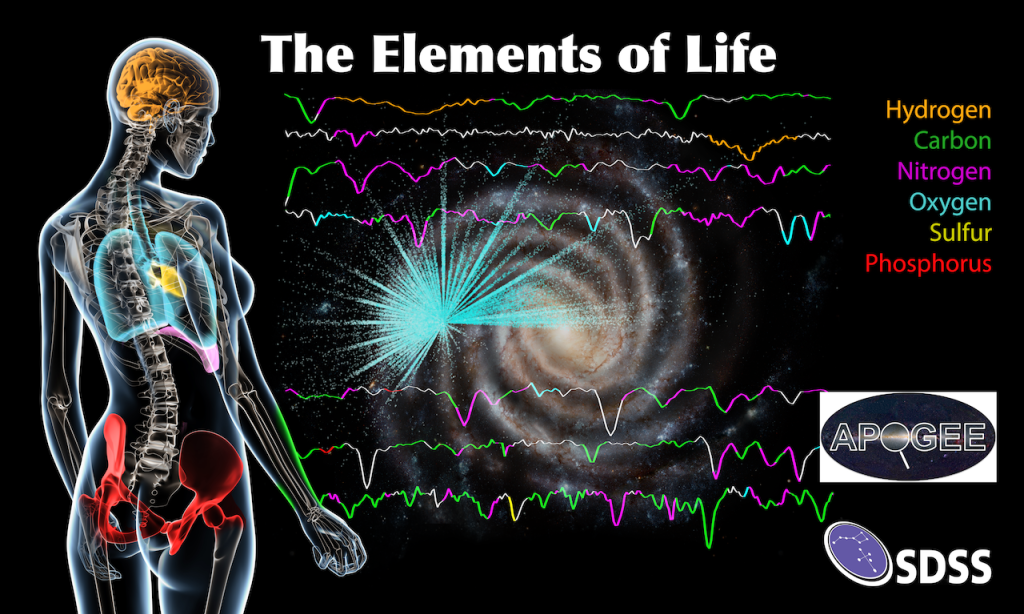 Spectroscopy reveals the amount of elements in each star's atmosphere. Each colour on this chart corresponds to an element in the human body. The blue dots indicate the amount of oxygen in each mapped star. (Image: Dana Berry/SkyWorks Digital Inc.; SDSS collaboration)

What this could mean for the potential of finding other life in the galaxy is tantalising. But even without extraterrestrial speculation, it is an incredible feat of human curiosity to have looked at the stars and found ourselves in them. The atoms that make up your body have travelled inconceivable distances over billions of years, and come together to form a living, breathing, thinking human being.

To complete the Carl Sagan quote: “We are a way for the cosmos to know itself.”

For a great explanation of how elements are formed in stars, watch this excellent explainer from Professor Brian Cox:

Learn more about stellar chemistry and your place in the universe during one of Maropeng's monthly stargazing evenings!

Gaze through large-aperture telescopes after dinner at the Maropeng Hotel (subject to weather and viewing conditions). Bring your binoculars along and join an after-dinner laser-guided tour of the southern skies. Book now.