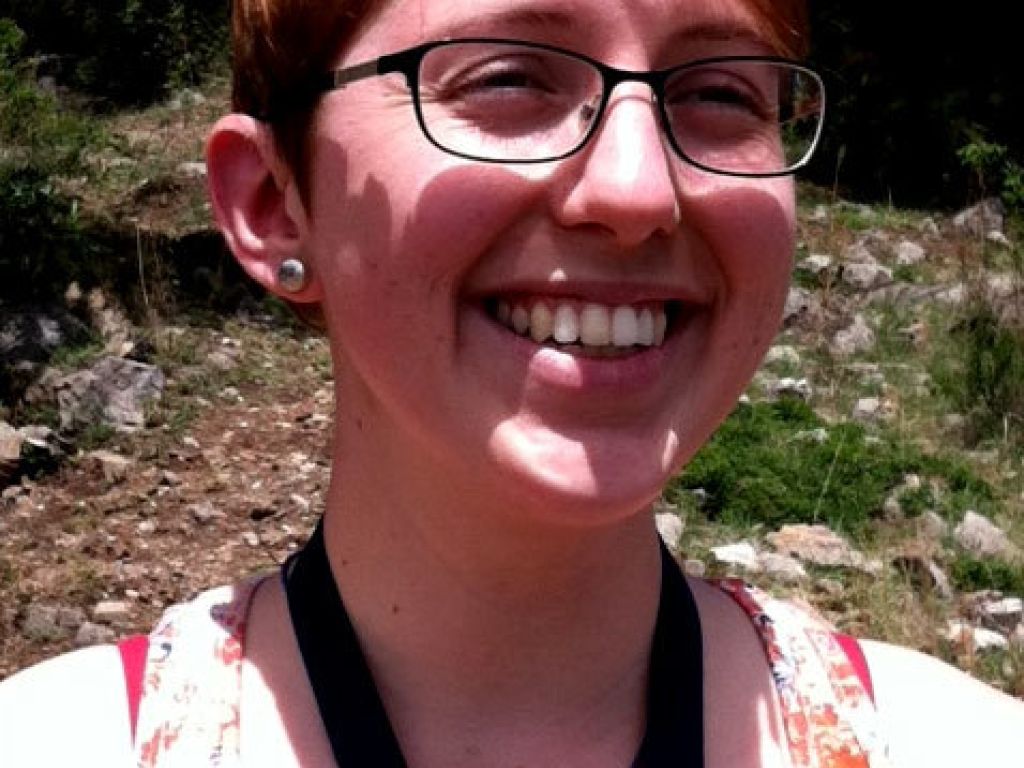 20th November 2013
The day starts (officially) at 6am. I’m up a little earlier this morning.

Crawl out of my sleeping bag and tent to the sight of Lee Berger bounding around. Lee is a Morning Person. Marina has been up since the predawn. Typically, she is the one who organises and cleans the kitchen tent after last night’s dinner and washes any cups and bowls that might be needed for breakfast. A pretty thankless job but with her usual pragmatism, Marina deals with it. Being up earlier than usual, Alia and I help her out.

By 6:20am, most of the camp has been motivated to wake by the persistent cacophony of the generator and the temptation of an internet connection or coffee. Lee unearths the white board and begins the morning briefing. Main points that are covered are safety and the order of scientists working in the cave over the course of the day. Alia, Becca, and I are first up and we’re set to continue excavating the “Puzzle Box,” the heap of bones revealed when we removed the cranium. 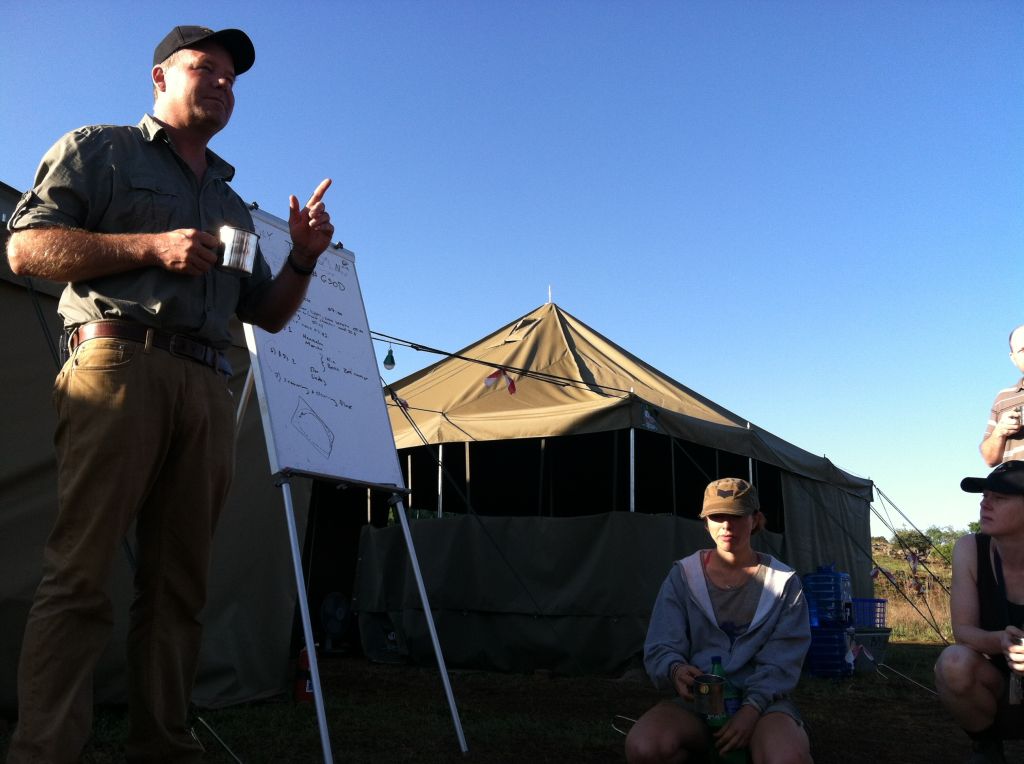 Lee Berger prepares us for the day with the 6:30 briefing, complete with whiteboard. (Photo by Andrew Howley)

First entry into the cave is scheduled for 7:15am with the Advance Cavers doing the safety check of coms and equipment before we Advance Scientists head in and begin our day. These guys are the sine qua non of this entire expedition. It’s dreary work, waiting around all day at strategic points along the cave system while all the action happens below them, but we couldn’t do it without them. The call comes: we are good to enter.

The Journey to the Chamber

When you enter the cave system proper, one of the most immediate impressions you get is of the dust. While air does move slowly through the caves, it nonetheless feels still and is permeated with fine particles of dirt. On the infrared camera displays in the Command Centre, it looks as though it’s snowing. It’s not oppressive by any means but you quickly become accustomed to feeling like you’ve taken half the cave with you in your nostrils at the end of the day.

The first major obstacle on the trek in is a crawl variously called the “Post Box”, the “International Post Box”, and “Superman Squeeze” that’s about 5 meters long. At this point I asked Steve, one of our cavers, what the clearance is to which he replies “Big enough!” I’m going to guess and say it varies between 20cm to 50cm at the far end. 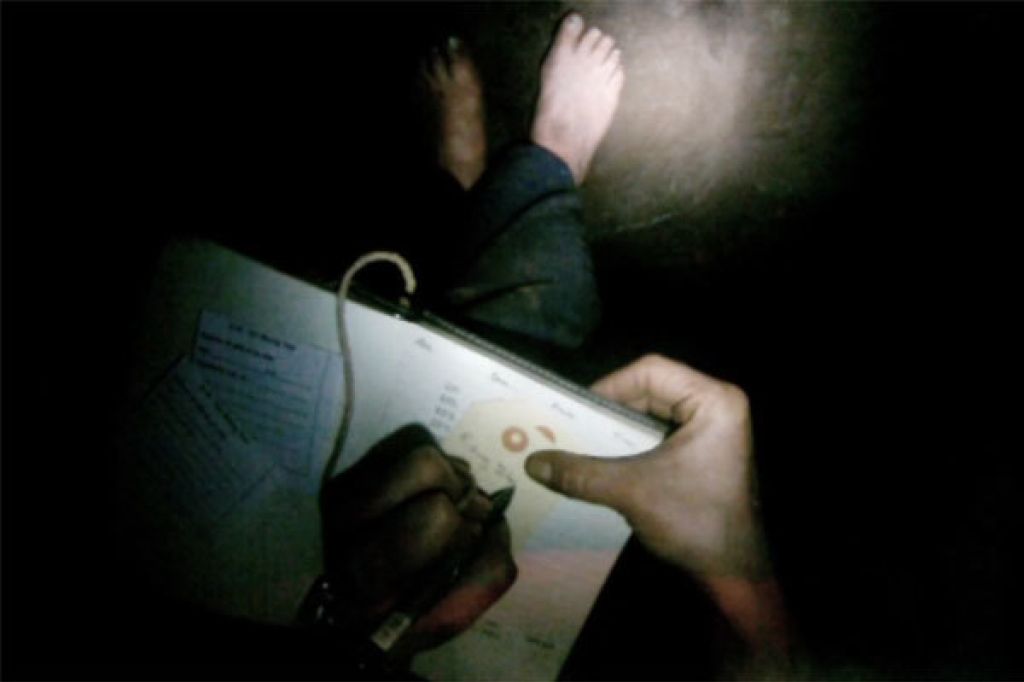 Marina’s helmet camera captures her view as she prepares tags for the fossils about to be removed. (Photo by Marina Elliott)

Next is the 22-meter scrabble up Dragon’s Back to the Chute entrance where Andre and Megan, Lee’s daughter, are chatting amicably in the dark. Becca is given the all-clear by CC to descend and when she reaches the bottom where Rupert waits, I follow her.

The landing zone/entrance to the dig site is cramped and notably damper than the rest of the cave system. The rainy season began just 2 weeks before we began digging and as it progresses, the rain water is saturating the surrounding dolomite. Each day a little more trickles down into the site and drips down on us as we work. The benefit is that the cave is comfortably cool most of the time but we’re not certain how the change in moisture levels will affect the preservation of the site and its contents. As the end of the expedition draws rapidly nearer, the rush is on to establish what we have, where it’s located, and remove the big elements that we can see – various long bones and other intriguing but as yet unnamed pieces.

A New Piece of the Puzzle

First order of the day while Becca and I wait for Alia is to do a fresh scan of the Puzzle Box. As more soil is removed, we’re finding more and more fossils and each needs its location and orientation relative to permanent markers recorded before we decide to photograph it, tag it, and bag it. We accomplish this with a high-definition handheld 3D scanner. When it’s complete, we do our low-gravity “moon walk” around the site, delicately avoiding exposed fossils as we station ourselves for the duration of shift. It makes for amusing viewing in the Command Center!

Becca is working on the uphill “pin 2” area, Alia the downhill “pin 2” area closest to the Puzzle Box, and I am downhill of “pin 9” at the lower edge of the sondage (the area we’re taking down layer by layer). We begin work and immediately start removing a surfeit of fossils. That is remarkable in and of itself, but today we hit the holy grail.

In the process of clearing the Puzzle Box, Alia and I excavate a critical section of frontal bone that can begin to reveal the face of the ancient hominids in this chamber. Our hands shake visibly as we painstakingly remove it from the ground and I finally hold it up to the camera for Lee to see. There’s a moment of breathless suspense as he looks at the camera and finally seems to register what he’s seeing. When his delighted exclamation of “Wow!” finally comes over the coms, it’s the cue for everyone to breathe out. The fossil is beautifully preserved. It’s exactly what we needed to start making some sense of this site.

We’re ecstatic. I know I can hardly contain my excitement long enough to pass off the fossil to Alia for recording and packing to take to the surface.

What doesn’t get translated to the surface so well despite the video surveillance and communications systems in place is how much fun we all have talking and joking with one another as we work. The fossils are thrilling, no doubt, and many of our grins and giggles are undoubtedly due to that but we also amuse each other. Between Marina’s wry understated humour to Lindsay’s light-hearted bawdiness, the atmosphere of the site as we work is one of exhilarated joy and camaraderie.

We are united by our science and the adventure of discovery. There’s nothing greater than that.

Read All Posts From the Rising Star Expedition