Little Foot, the almost complete, fossilised skeleton of an early form of the human ancestor Australopithecus, was hailed as one of the most remarkable discoveries ever in the field of palaeoanthropology when it was found deep inside a Sterkfontein cave.

Various attempts to date the skeleton were undertaken over more than a decade. Most recently, a dedicated team of experts scrutinised every bit of detail to ensure accuracy. They arrived at 3.67-million years old, making Little Foot the oldest known hominid from the Cradle of Humankind.

Professors Jan Kramers of the University of Johannesburg and Paul Dirks of James Cook University, Australia, recently disputed Little Foot’s age. However, paleoanthropologist Ron Clarke, the honorary research fellow at the University of the Witwatersrand who originally discovered Little Foot, and his team of experts are confident in their dating. Professor Clarke and his team will be submitting their response to a research paper by Kramers and Dirks this week. The article should appear in the next issue of the South African Journal of Science.

Professor Laurent Bruxelles, an honorary research fellow at the University of Witwatersrand who was involved in the dating process, said: “Since our paper in the Journal of Human Evolution (JHE) in 2014 and the dating published in Nature in 2015, we continued to work on the Little Foot sedimentary and cave content. All data fit and confirm our first results. Based on robust and precise work in the cave, with an interdisciplinary team, further confirmation will be published soon and should leave no doubts about Little Foot’s age.”

Clarke stresses that his team has been working on the detailed documentation and interpretation of the Sterkfontein stratigraphy (the branch of geology concerned with the order and relative position of strata and their relationship to the geological timescale) for many years and is undeterred by claims by scientists who had merely visited the site and formulated theories “without substantial research and evidence”. For Clarke and his team, the proof is in the evidence found and the scientific expertise used to decipher these results.

“The initial findings and our dating are based on important fieldwork in the cave. We first studied in detail the stratigraphy of Member 2 breccia [a sedimentary unit or layer of rock] around Little Foot, and published it in 2014 in the JHE,” says Bruxelles.

“Thanks to that work, we could understand why previous dates on flowstones did not date the actual sediment containing the skeleton, and we deciphered the deposition story of Member 2. It’s only after this work that a team again started the analysis of different sand an rock samples from the breccia around Little Foot. They were sampled below, on the same level and above it to be sure to date the whole Member 2 breccia and not focus on only one special event around the fossil.

“For the 11 samples, nine gave the same age reported. One had a problem in the lab and was excluded, and the other one came from the wall of the cave and thus not from sediment outside the cave and so also had to be excluded. This work provided robust evidence that the breccia in the Little Foot deposit is well preserved and all has the same history. It cannot come from the mixing of different-aged deposits,” Bruxelles explains.

He adds that the stratigraphy of Member 2 breccia shows that there are no dolomite or breccia blocks that would infer that a collapse occurred from the cave’s roof or a former upper chamber lying above Member 2. “This means that Member 2 breccia is in situ [in place and in good context], that the sediments were not reworked, and that their dating can be applied to Little Foot, because the fossil lay perfectly within the layers of the breccia,” says Bruxelles.

Clarke and Bruxelles explain the complicated fossil-dating process used to arrive at Little Foot’s age. The surface of the earth receives cosmogenic rays that create isotopes of aluminum (26Al) and beryllium (10Be) within quartz grains contained in the rocks and sediments. When these sediments and rocks fall deep enough into caves, they are shielded from the further formation of these isotopes and the existing isotopes begin to decay. Because it is known how long it takes for these isotopes to decay, the combination of the specific aluminum and beryllium isotope measurements reveal the length of time they were buried in the cave.

The machine used to detect the measurements at Purdue University in Indiana in the United States contains a gas-filled magnet that separates the various isotopes in a sample very cleanly and measures their amounts accurately. Only two laboratories worldwide possess this advanced technology, providing the date for Little Foot with astounding accuracy. The team explains that this is by far the most accurate method of dating the fossil – without this technique, the detection of the isotopes is messy and “swamped” by noise from other isotopes in the sample.

Bruxelles adds that South Africa does not have volcanic deposits, which have been the main means of reliably dating hominid sites in East Africa. For many years, scientists have depended on faunal age estimates, which are often not informative enough for various reasons. Hence, this breakthrough, gas-filled magnet technology delivers remarkable dating accuracy.

So, what’s the truth about Little Foot’s age in a nutshell? 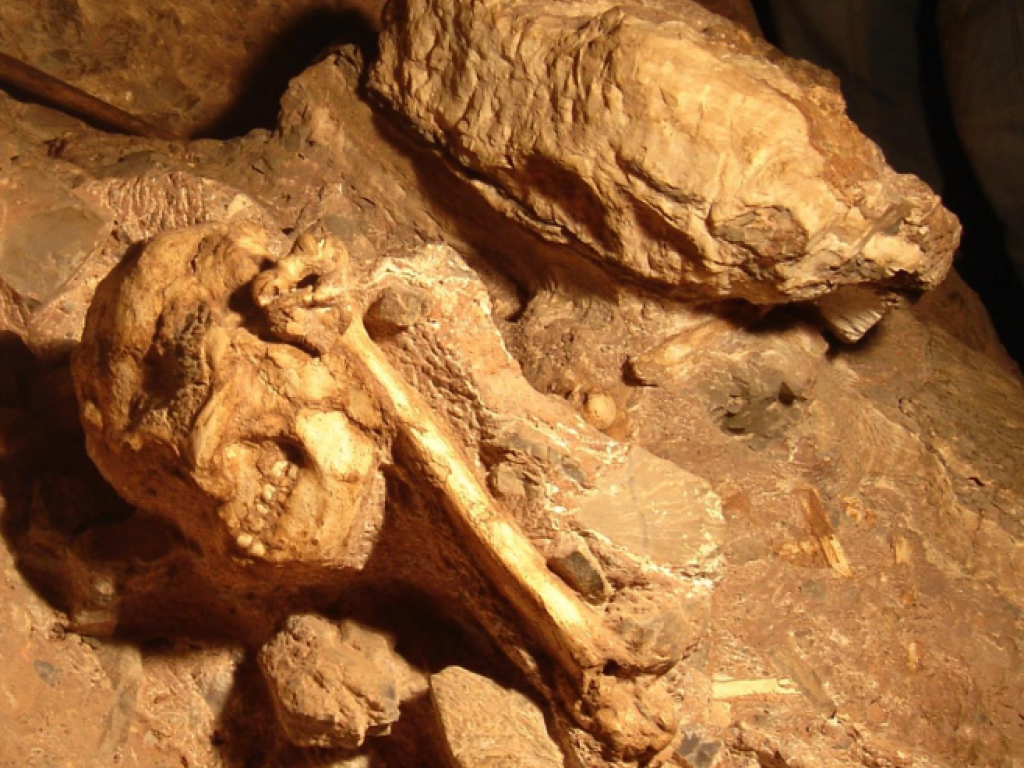 Little Foot in the cave in 2009. Image: Professor Darryl Granger

“Little Foot is now proven to be 3.67-million years old, based on the isochron method of cosmogenic dating. This method takes a large number of samples from the same deposit so that errors can be avoided,” says Bruxelles. Cosmogenic dating specialist Darryl Granger explains that Kramers and Dirks had ignored the robust isochron method and focused on a single sample, assuming that the other samples had all been reworked from an upper-cave deposit that no longer existed. Bruxelles is certain there is no evidence for such an upper cave.

Clarke and Bruxelles believe that healthy debate and discussions testing findings and theories help science progress. “However, it has to be founded on truth and proper research and facts,” says Clarke. He says the claims by Kramers and Dirks were “ill-informed”.

“They don’t have the correct model of geomorphology of the site and the detailed stratigraphy of the Silberberg Grotto [the cavern where Little Foot was found]. An upper chamber could not have existed and contributed deposit through several metres of underlying breccia and flowstone. They are allowing their assumption of an upper chamber to dictate their dating model,” Clarke says.

Bruxelles further refutes the claims by Kramers and Dirks that Little Foot is actually younger, as neither of them is a geomorphologist or karstology specialist, meaning cave formation and karstic landscape evolution are not their specialties.

“But this geomorphological context is special and complex in terms of cave formation, evolution and sediments accumulation. As I am a karst specialist and worked in the cave for nearly 10 years, I can’t understand why the authors never contacted me to discuss, share the results and go together to the site to exchange our points of view. Science needs this kind of confrontation and every hypothesis could be stronger if we exchange ideas, hypotheses and interpretation,” says Bruxelles.

He adds that he worked for many years with several teams in the Cradle and is always open for more collaboration. “It’s important to discuss the previous publications, as this is how science works and we need that kind of debate. But, for that, the discussion must be based on scientific facts or observations. This team didn’t work on the cave and especially on the cave deposits in which Little Foot is embedded.

“There’s no evidence for the upper chamber Kramers and Dirks have said once existed but is now eroded away. Traces of such a chamber would have been left in the cave system. Rather, the stratigraphic sequence is in order. They have also incorrectly cited Ron Clarke as publishing a maximum age of 2-million years for Member 4 breccia rock. He never did this,” says Bruxelles.

“Their interpretation lacks any formal evidence or new observations, and they replace a simple scenario, very common in this area [animals falling into caves] by a more complicated and even unrealistic one, explaining that an Australopithecus entered by himself, then fell in a pit in a distal part of a chamber, entering the younger cave deposit together with the older sediments.”

Clarke and Bruxelles say they will address the claims disputing Little Foot’s age with proper explanations in their group’s publications. “Our cosmogenic dating person also tells us that the mathematical modelling used by Dirks and Kramers is incorrect. The group is working on explaining all these errors in a forthcoming paper in response in the South African Journal of Science,” says Bruxelles.

He concludes about the Kramers and Dirks’s paper: “no fieldwork, no stratigraphy, no dates for a more complex and unbelievable scenario.” 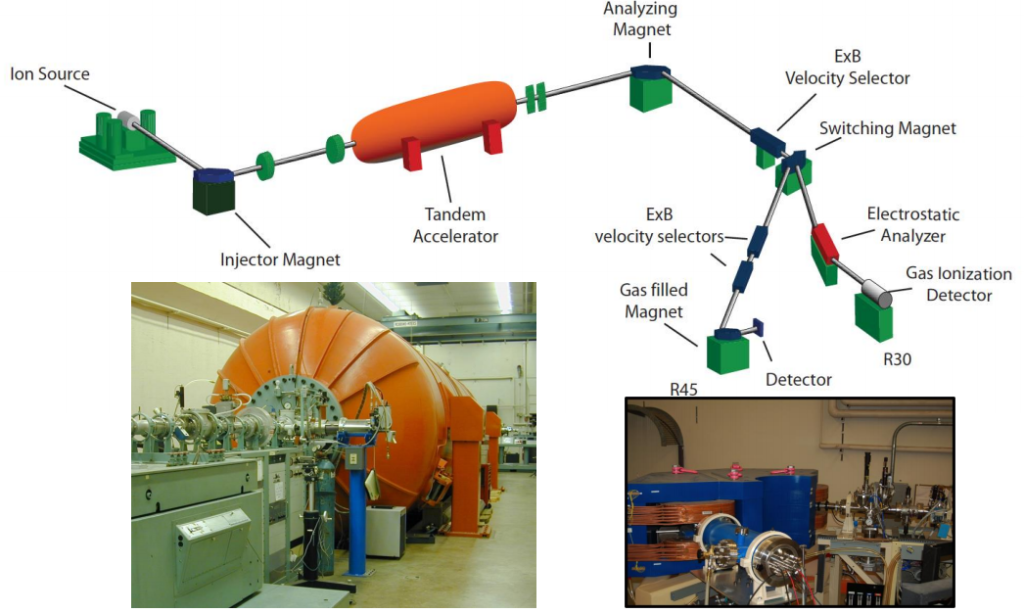 Here Professor Darryl Granger tells us about the dating machinery and how it works.