“We are extremely privileged to also be hosting the Long March to Freedom exhibition – 100 life-sized bronze statues celebrating our uniquely South African story. Each of these statues tells a story. Each of the people depicted in bronze made a unique contribution. But they did not stand alone. Behind them, in front of them, alongside them, stood millions, who were determined not to let oppression be the last word in our story.

“The SAHA Struggle T-shirts exhibition celebrates these people. All of them! We celebrate them with gratitude and with joy, for their contribution to freedom and democracy in our country was huge.”

Here are five things to know about the Struggle T-shirts exhibition:

It’s all about preserving our history

SAHA is the keeper of objects that form part of our history as a nation. It has a collection of about 500 anti-apartheid struggle T-shirts that were worn by people who were not afraid of using their bodies to make political statements. The shirts were donated over the years by former activists. 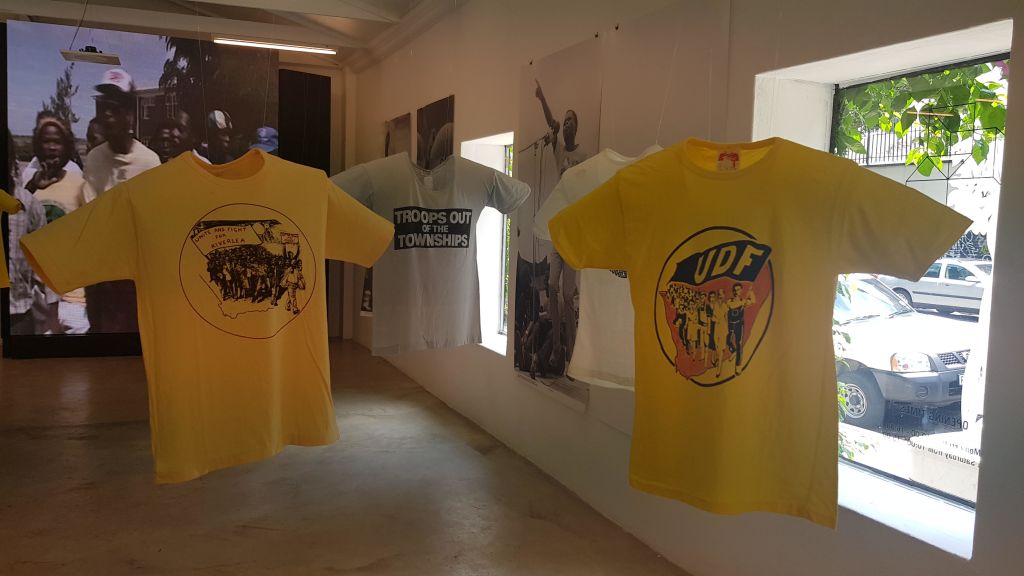 The T-shirts tell South Africa's story in a unique and memorable way.

The exhibition will officially open to the public on 16 June 2019, when Maropeng will allow free entry to young people under the age of 18. For the youth, it’s a great way to mark the day, as visitors will learn more about the short-sleeved casual tops that become powerful political weapons.

While here, you should take the opportunity to visit the world-famous interactive exhibition in the visitor centre, which traces the origins of humanity (check out the exhibition guide here). And don’t forget to stop by the Long March to Freedom exhibition (which you’ll find right next to our parking area).

The T-shirts were produced at the height of resistance to apartheid. Some were confiscated and destroyed by the police, while some made it to the townships where people wore them at rallies, funerals and any gathering where they could speak about freedom and resisting oppression.

During apartheid, certain logos and slogans could have one arrested or killed. But this did not stop our freedom fighters from making their declarations for liberation.

Some of the phrases they wore on their chests and backs included messages of solidarity, resistance and commemoration, such as “Organising for people’s power”, “Away with Bantustans”, “Troops out of the township” and “We Remember You Solomon Mahlangu”.

Before there were social media platforms for expressing opinions from a distant and protected space, people had to communicate their views bravely, literally speaking out in the media and standing by their views in a public space in order to bring awareness to a cause or start a movement.

The struggle T-shirts on display represent our people’s decision to make a stand, being proud of the political ideals they stood for without fear, and wearing their hearts on their sleeves – and chests.