An eland falls to its knees, dying from wounds inflicted by hunters. A man leans forward, his arms held taut behind him as if in supplication. A thin red line carefully traced, almost threaded through the contours of a rock, is highlighted by carefully placed dots of white.

That’s why I feel very fortunate to meet and interview Professor David Lewis-Williams, one of the world’s foremost experts on rock art. 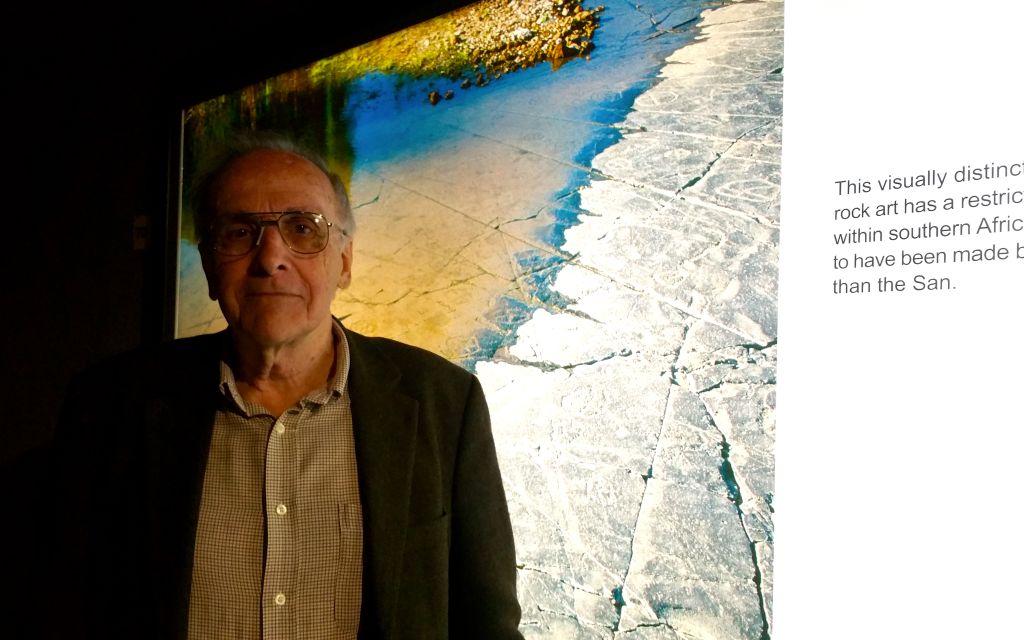 Professor David Lewis-Williams at the Origins Centre at Wits University.

For Lewis-Williams, who has copied some 4 000 paintings in the Drakensberg (one of the richest rock art sites in Southern Africa and the world), the key to understanding rock art lies in putting aside all your preconceived notions about art itself.

“I think it’s wrong to think that San rock art is like Western art where you can make pictures to entertain people, for beauty or to tell a story. Among the San, it was essentially to do with contacting the spirit world,” Lewis-Williams says when we meet at the Rock Art Research Institute (RARI) at Wits University.

Lewis-Williams was recently at the opening of a world-famous exhibition of replicas of French cave paintings in Johannesburg. Wonders of Rock Art: Lascaux Cave and Africa opened at the Sci-Bono Discovery Centre in Newtown last month. It showcases paintings discovered in a cave in France that are 17 000 years old.

“The earliest image that we’ve got in Southern Africa is from the Apollo 11 cave in southern Namibia, in pieces of stone that fell and were buried. That is dated at 27 000 years old. Lascaux is 17 000 years old. So we’ve got 10 000 years on them!” he laughs.

Lewis-Williams estimates that there are about 14 000 rock art sites across South Africa. He says the most densely painted areas include the Cederberg in the Western Cape, as well as parts of the Eastern Cape, KwaZulu-Natal and the Free State. And, he says, “new” paintings are constantly being discovered, often by farmers and hikers who stumble upon them. In fact, RARI used to have a dedicated “911” team that would respond to alerts about new findings – but this team was disbanded because of a lack of funding.

The African Rock Art Digital Archive contains photographs of rock paintings from all over the country taken by RARI.

Lewis-Williams is saddened by the lack of funding to this kind of research, because rock art represents fragile pieces of the past that haven’t yet been fully explored or understood.

“It’s incredibly important: it’s a heritage that is irreplaceable; it’s a non-renewable resource. And compared with rock art elsewhere in the world, we really are number one – there has been international interest in what’s been found here,” he says.

One of the biggest contributions that South Africa has made to the field of study, Lewis-Williams says, is getting international researchers to change their research methods and consider ethnography when interpreting paintings. Ethnography is a field of study that examines cultures, rituals and beliefs. It is a subject that has been an enduring thread in his work.

“My principal interest is in why did the San people paint, and what did the paintings mean to them? That means you’ve got to find out what San people believed and did, and so on.”

This approach has led Lewis-Williams through an extensive study of the extinct /Xam language, and extensive work with the surviving descendants of the Khoisan community, who now live in remote parts of the Northern Cape. This community has been described as “the oldest people on Earth”, as they’re descendants of the San people.

Lewis-Williams has found, through his own work and work done by researchers before him, that at its core, rock art was not, as many believe, about capturing day-to-day life such as hunting scenes. It was, in most instances, a deeply spiritual exercise.

“It’s about contacting the spirit world. The animal that they painted most was the eland, and the eland is the biggest of the antelope, but is the animal they believed to have the most spiritual power. So they try to capture the power of the eland in traditional ceremonies to take them into this spirit world. And there they make it rain, or heal the sick, and then come back and tell people what they experienced in the spirit world.”

When South Africa designed a new coat of arms in 2000, RARI was invited by then President Thabo Mbeki to propose rock art that could be used on the emblem. Lewis-Williams was also invited to translate South Africa’s motto into the now extinct /Xam language. Lewis-Williams says they deliberately chose a figure from of a piece of rock art that was being kept in a museum, in order to ensure the piece that was the original inspiration for the coat of arms was preserved for future generations.

“If it’s still out in the open, it’s going to fade. A hundred years from now, it’s not going to be there. Even in 20 years you can see decay. It’s alarming. That’s why they’ve got to be recorded. So, there’s a big slab that was taken out of the Eastern Cape in 1917 in the Iziko Museum in Cape Town. We took a human figure out of that.” He says the image was duplicated and flipped to form the two figures we see on the coat of arms today.

“In the original slab, he is standing on a red line with white dots all along it. This is a mystical symbol. So he is a medicine man, a shaman, or an igqirha.”

The red line was left out of the coat of arms, and instead, below the figures, is South Africa’s motto in the /Xam language: !ke e: /xarra //ke directly translates to “People who are different, come together”, according to Lewis-Williams. 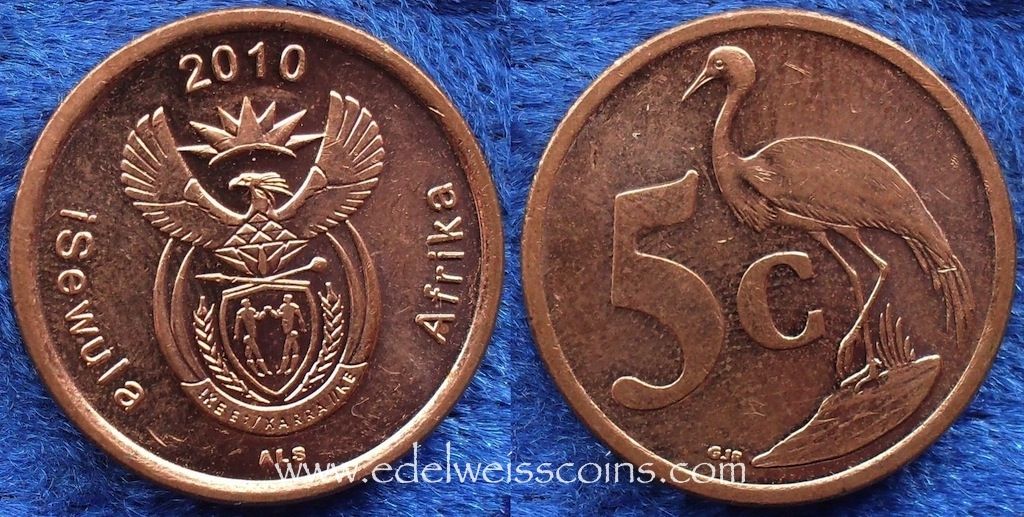 The coat of arms on a South African 5c coin. (Image: Flickr)

The delicate nature of rock art is of particular importance to Lewis-Williams, who says preserving these pieces of the past is an incredibly difficult task, because even though they have survived thousands of years, they fade due to the natural elements. He’s urged visitors to such sites to bear this in mind.

“Don’t touch them. Don’t wet them. Respect them. If you go to an art gallery, you don’t go up to a painting and touch it. Don’t touch these either,” he says simply.