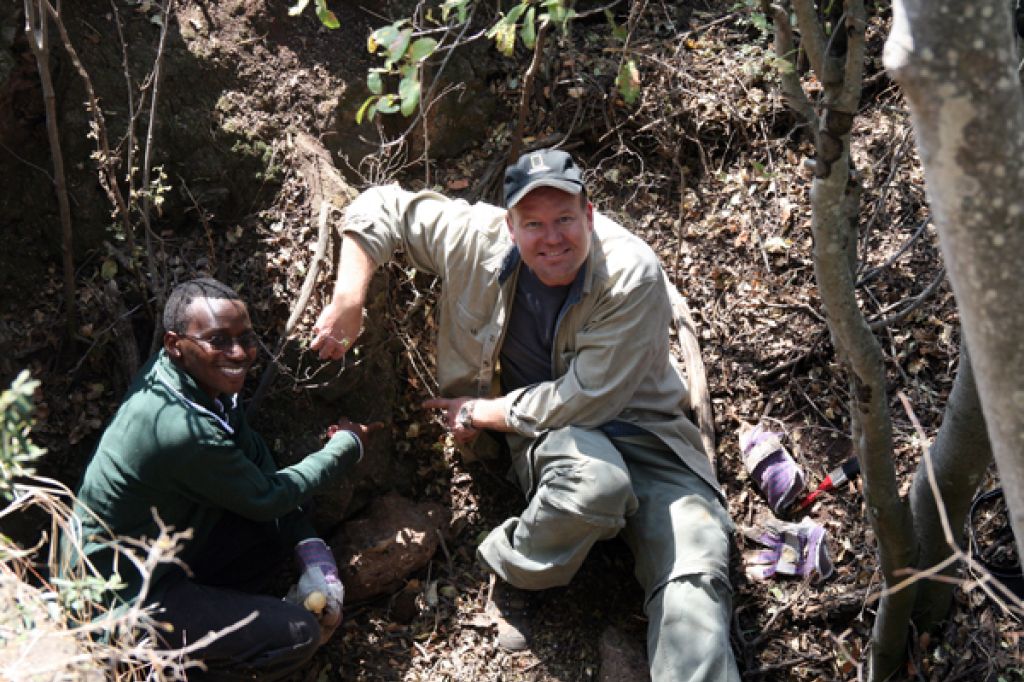 Job Kibii with Lee Berger at the Malapa Cave site

It’s proved to be a treasure trove of fossils has Malapa Cave, one of the youngsters at the Cradle of Humankind.

Only three years ago, Professor Lee Berger of the Institute for Human Evolution and the University of the Witwatersrand’s (Wits), School of Geosciences was ingeniously using Google Earth to survey the Cradle for undiscovered cave sites. By looking at clumps of limestone-loving trees, he was able to pinpoint 500 undiscovered cave sites.

Malapa (meaning homestead in Sesotho) was one of them, and one that immediately proved to be a remarkably fertile hunting ground.

The fossils have not stopped coming. Making world headlines was the discovery at Malapa of two of Africa’s most complete hominid skeletons of the new species of human ancestor known as Australopithecus sediba. Since then scientists at Malapa have continued to unearth additional hominid fossils, and fossils of more than 25 animal species that include brown hyena, antelope, sabre-toothed cat, wild dog and horse.

The Malapa Cave system, now exposed after millions of years of erosion, was once many metres underground. “There is evidence that some of these animals fell down vertical shafts,” says Dr Job Kibii, a researcher at the Institute for Human Evolution and a co-permit holder and director of excavations at the small but now world-famous Malapa site, about 15km north-east of the Sterkfontein Caves.

“At the Malapa site, the concealed openings of vertical shafts would have been death traps, and certainly this scenario is the most likely for most of the fauna recovered from the cave, and probably the sediba hominids. The remains found at Malapa were not scavenged, and this partly explains the completeness and richness of fossils at the site.

“There is evidence that yellowwood trees grew in the Malapa area two million years ago, which indicates that it was once wetter and far more forested.”

Kibii clearly recalls the discovery of the Australopithecus sediba skeletons, and his account is much like a thriller. “Three days before the first find I asked Professor Berger if he would be my academic postdoctoral host, and he had asked me if I’d be interested in excavating a new cave site at the Cradle. We both accepted each other’s request, and on Friday August 15 [2008] we decided to visit Malapa.” 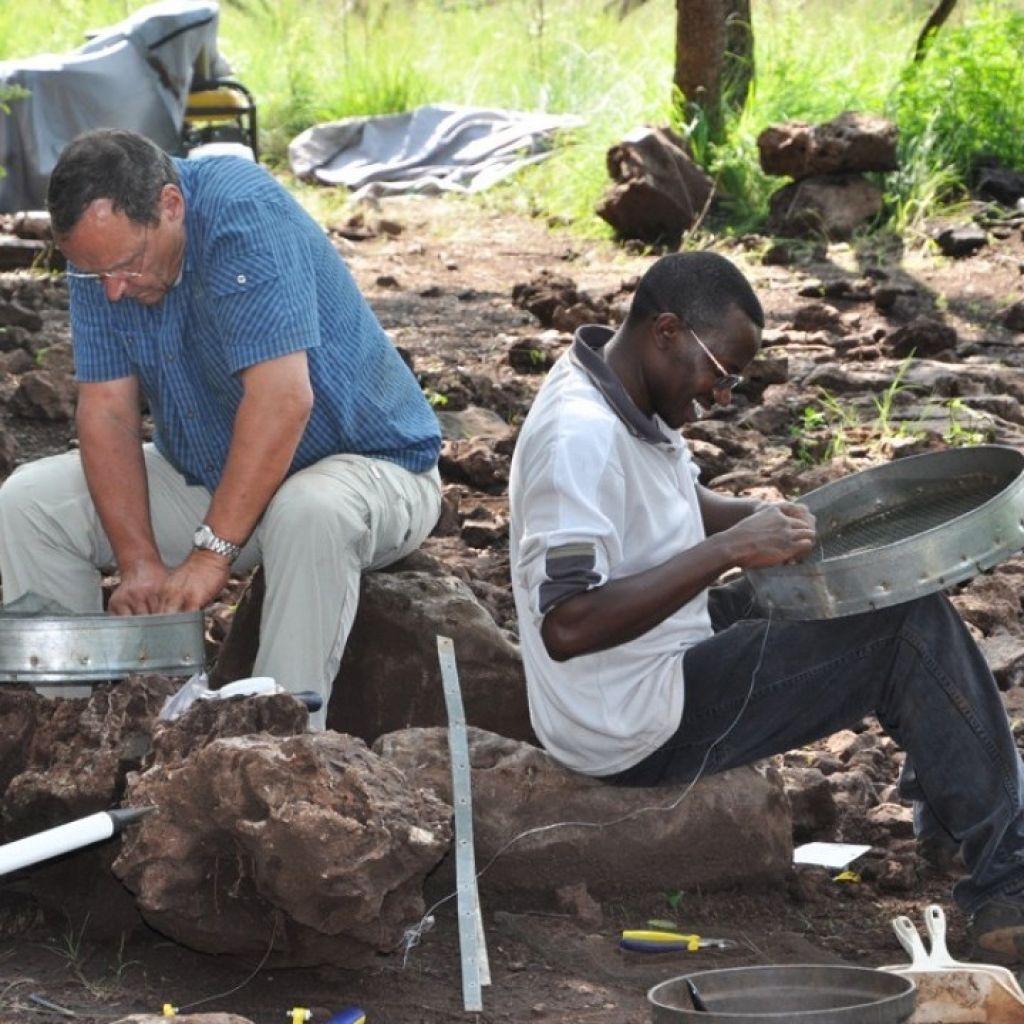 Kibii describes arriving on site at 10am with Berger, Berger’s son Matthew and their dog Tau. “I was surprised at Malapa,” he says. “It was a small hole in the ground with trees in the middle. There were a number of loose breccia blocks scattered on the surface that miners had blasted, probably in the late 19th or early 20th century. Some of the breccia blocks had visible bones on the surface and Lee suggested we gather them.

“At about 10.45am Tau wandered off into the long grass and Matthew followed, leaving Lee and me on the edge of the pit, strategising the way forward to excavate the site.

“Suddenly Matthew called out, ‘Dad I found a fossil!’ Lee said it was probably another antelope and went to check. I walked into the pit to get a better feel of it and heard Lee exclaim, ‘Son of a gun!’ He called out to me to come and have a look.”

Kibii says that embedded in the breccia block Matthew had found was a clearly visible well-preserved hominid clavicle (collarbone) on one side, and a canine on the opposite. “We were over the moon,” he says. “We had found rare hominid specimens on our first day at Malapa, and they were in pristine condition. These would later turn out to be specimens of the juvenile male now known as Karabo.”

On September 4 Berger and Kibii returned to the site with colleagues from the Bernard Price Institute and the Institute for Human Evolution. However, after hours of flipping almost every loose breccia block, he says the enthusiasm had somewhat faded. No additional hominid fossil was found.

“But the sun was rising higher, and the shadows of trees over the site were changing,” says Kibii. “Lee was standing at the edge of the pit, looking into it, and saw the head of a hominid humerus (upper arm bone) protruding from the wall. He went in to have a closer look and, as he leaned against the wall, two hominid teeth fell into his hand.”

On September 10 the breccia block containing the humerus was detached and taken to Wits University, where it revealed the complete upper arm and near-complete hand of the adult female.

Kibii still returns to Malapa. “I go every now and then,” he says. “After our discoveries in 2008 I was tasked with overseeing and directing excavation at the site. During this time, numerous other hominid and fauna specimens were recovered.”

Aside from unearthing the Australopithecus sediba specimens, other highlights for Kibii at Malapa were his February 27, 2009 discovery of the only horse specimens, which set the upper limit date of Malapa for fauna at 2.36-million years. Others are January 17, 2010, when some of the Australopithecus sediba female lumbar vertebrae were discovered, and January 27 that year when the sediba adult female pelvic ilium was found.

“I am currently working on the hand and pelvis of Australopithecus sediba, and analysing other fauna from the Malapa site, as well as directing excavation,” says Kibii. “I never fail to be excited when visiting this site. Every time we recover more fossils we are adding to the database of what we know about evolution.”

Maropeng is hosting a series of exclusive tours around the new fossil display, More secrets of sediba revealed. The tour costs R350. It begins at 16h00 and includes a delicious dinner at the Maropeng Boutique Hotel.