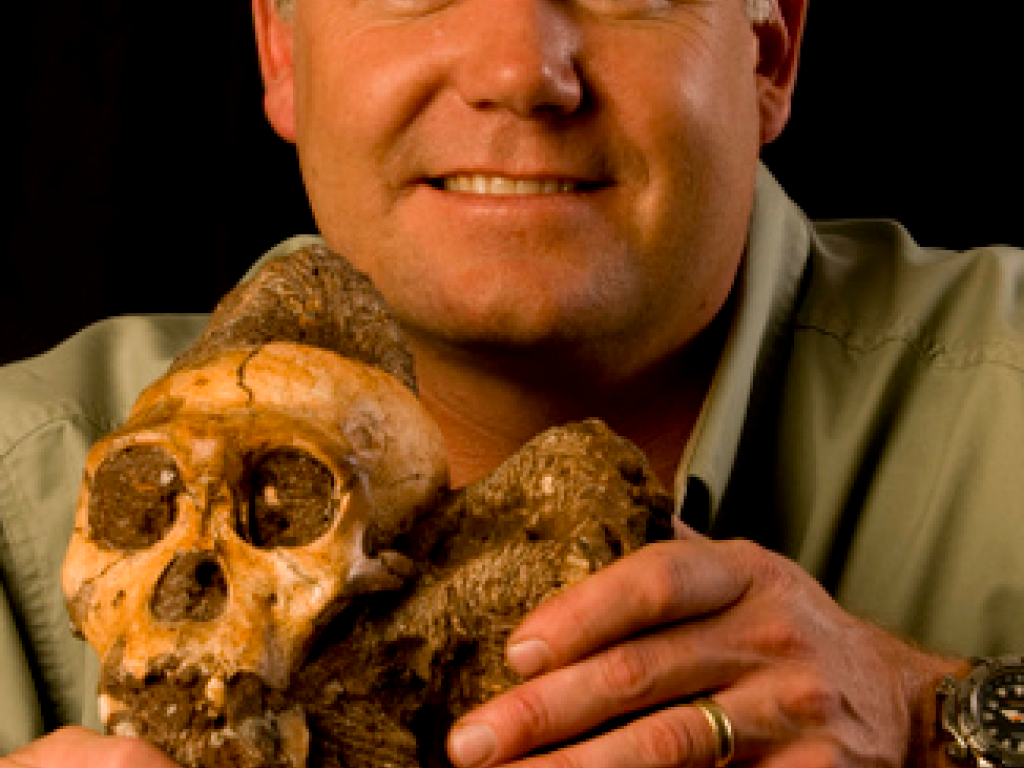 Professor Lee Berger is the man being touted around the world as having discovered an entirely new species of hominid in the Cradle of Humankind, one of South Africa’s World Heritage Sites.

Berger is the Reader in Human Evolution and the Public Understanding of Science at the Institute for Human Evolution, School of Geosciences, at the University of the Witwatersrand. He is an award-winning researcher, author and speaker.

“I am having the adventure of my life. It’s just grins, ear to ear. We are kind of like little kids who grew up and get to play in the biggest sandpit in the world, looking for buried treasure.”

The Wits University scholar led a team that unearthed two specimens of the newly unveiled Australopithecus sediba, at the Malapa Caves. The discovery, which was made in the second half of 2008, has shed important light on the evolution of our own species, Homo sapiens; it appears to be a transitional form, maybe the best yet found, between early australopithecines and early members of the genus Homo.

The sediba fossils will potentially replace other candidates, including Homo habilis, as our most distant direct ancestor.

“I do truly believe that Australopithecus sediba will probably act as a Rosetta Stone, unlocking our understanding of where australopithecines went and where the earliest members of the genus Homo emerged.”

Berger’s own nine-year-old son, Matthew, is credited with discovering the first pieces of the partial skeleton of a young boy at the Malapa site. Berger soon found the skeleton of an older female, which he believes could have been related to the boy. The scientist and his team are confident the two died together, or in relatively quick succession.

Berger says he immediately realised the significance of the lucky find his son Matthew made back in August 2008:

“These are probably the rarest, most sought-after objects on planet Earth. There are literally just a few thousand of them. I was speechless, I walked over and when I took the rock from him, I turned it over and there was a canine tooth. I realised that my whole life had changed and, probably, so had Matthew’s.”

Berger says that, while the moment he discovered the fossils was overwhelming, it took some time for the magnitude of this breakthrough to sink in:

“There was an emerging sense that we had something different, but we were being extremely cautious, particularly because we had something so complete. We truly wanted to take our time and understand exactly what this was before we went out into the scientific press.”

“We were at the National Museum of Kenya with some of the most famous fossils in the world spread out in front of us and we spent the morning looking at them … We’d gone through a long debate and everyone was exhausted, and I looked across the room and I said ‘Guys, we’ve got something new’; everyone said ‘Yes, we do’, and there was consensus in the team. It was an extraordinary moment”.

Berger takes great joy in his find, and in his luck.

“Most scientists who do what I do, don’t find anything like this in their entire lives. To find this sort of record, that might contribute to the understanding about where our genus comes from: that’s just extraordinary.”

The academic clearly relishes the thought of what else may lie hidden in the Malapa Caves. He believes that he and his team have only scratched the surface by clearing out the site. Proper excavations are yet to get underway; yet already they’ve unearthed a new species of hominid, as well as a wide range of other animals including two types of sabre tooth cats, hyena, wild dog, wild cat, kudu, horse and a multitude of smaller species.

“We can’t believe what we’ve already found. This has been the most unusual project I have ever been involved in – literally every time you find something else you say ‘It can’t get better than this’ - and then it does, every day.”