When primatologist and activist Jane Goodall was four-and-a-half years old, she carried out her first scientific experiment. While visiting a farm from London, it was her job to collect the eggs, but something puzzled her: How did the egg get out of the chicken?

Nobody was willing to answer her question so she decided to investigate for herself by following a hen into a nest box. When the hen took fright, she concealed herself in another nest box and waited.

And waited, and waited …

By the time she emerged from the coop, triumphant with her newfound knowledge, it was already dusk and a search party was out looking for her. 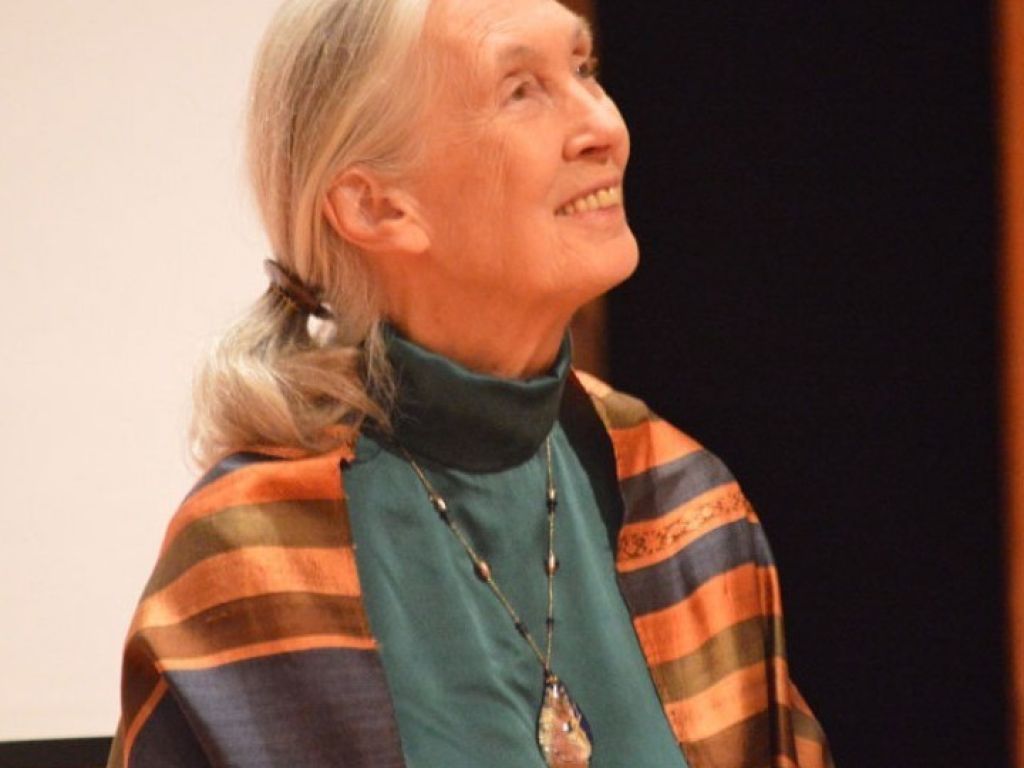 Jane Goodall during the lecture at UCT

That, says Goodall, was a portent of things to come, as years later she would exercise all those same qualities of curiosity and persistence in studying the chimpanzees of what was to become Gombe Stream National Park in Tanzania.

It is to her mother that she gives all credit – for not scolding her for disappearing all afternoon, but rather listening patiently to her excited explanation of her new discovery about chickens and eggs.

And also for encouraging her love of animals, for allowing her to set off on an African adventure as a 23-year-old in 1957 (at a time when this wasn’t the done thing), and for going to live by her side at Gombe in the early days because the authorities would not allow such a young girl to live alone.

Goodall shared these and many other anecdotes about her extraordinary life during a talk at the University of Cape Town (UCT) on Thursday night. She is on a whistle-stop lecture tour of South Africa to mark her 80th birthday in April, with appearances at UCT and the University of the Witwatersrand.

Whistle-stop is the only mode she knows, travelling an average of 300 days a year to spread her message of activism, not only for the environment but also for people whose lives must be improved if the animals that depend on them are to survive.

When she started studying chimpanzees, Goodall only had a secretarial course to her name. But years later she would emerge from Cambridge University with a doctorate for her ground-breaking work during which she observed chimps using tools, engaging in primitive “wars”, and showing the kind of affection and emotion previously only ascribed to humans. 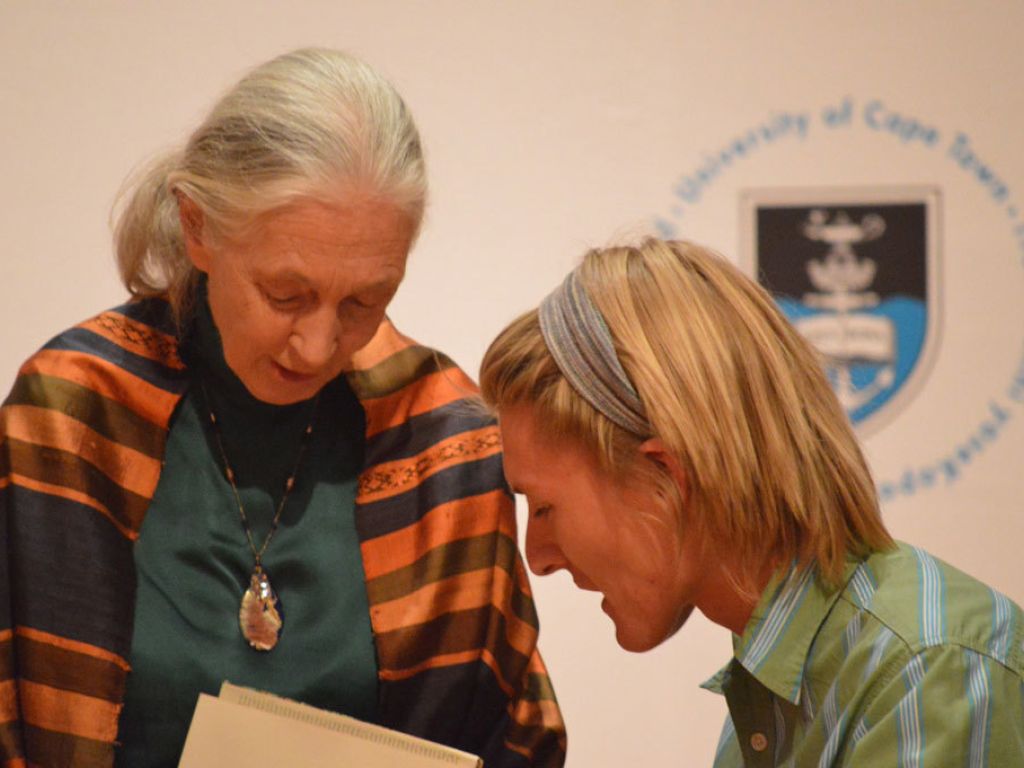 Goodall signing a book for a student

Goodall’s message in South Africa was directed primarily at young people confronted by a world that some say is facing its sixth extinction. But she believes there is still hope.

Firstly, she talked about the energy, commitment, dedication and courage of young people who can change the world for the better.

Then there is the extraordinary human brain – a brain that is able to put a robotic vehicle on Mars, but also seemingly out of step with its heart in the pursuit of money and a lust for power. “How is it possible that the most intellectual species is destroying its own home?” she asked.

Thirdly, she cited the resilience of nature, clearly illustrated around her beloved Gombe, where local villagers have begun to set aside land to restore the forest. “Some trees are already 30-foot high and there is three times more forest than 10 years ago,” she said.

Finally, she cited the indomitable human spirit – a spirit that has seen people achieve the seemingly impossible; people like Nelson Mandela, Martin Luther King, and her friend Gary Haun, who lost his eyesight in the US Marines but was determined to become a magician – and became a very good one at that.

Haun gave her a gift of a soft toy monkey, which she has dubbed Mr H, and which she carries with her everywhere.

He’d made a mistake, though, thinking it was a chimpanzee. When she made him feel the tail (chimps don’t have tails), he was undeterred and said: “Take him with you wherever you go and you’ll know I’m with you in spirit.”

Thus Mr H the mascot was with her on the stage at UCT as she spoke directly to the hearts of the audience, encouraging everyone to take the first step towards change.

“Every single one of us makes a difference every single day,” she said. “The biggest problem is apathy.” 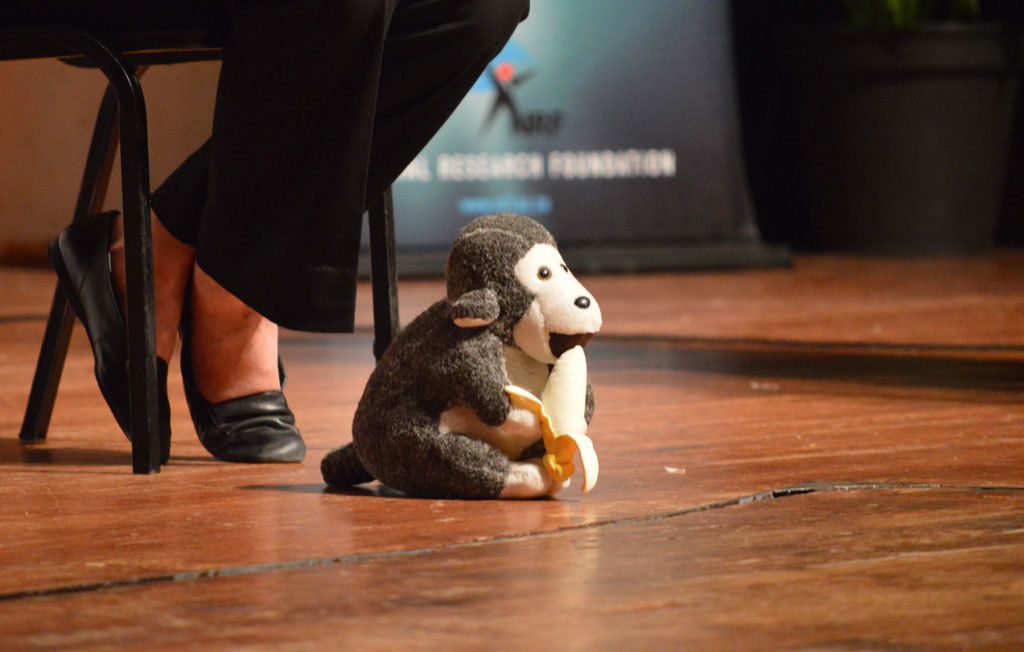 Goodall's mascot, Mr H, at her feet on the stage as she's waiting to speak. Photos courtesy of Andrea Weiss