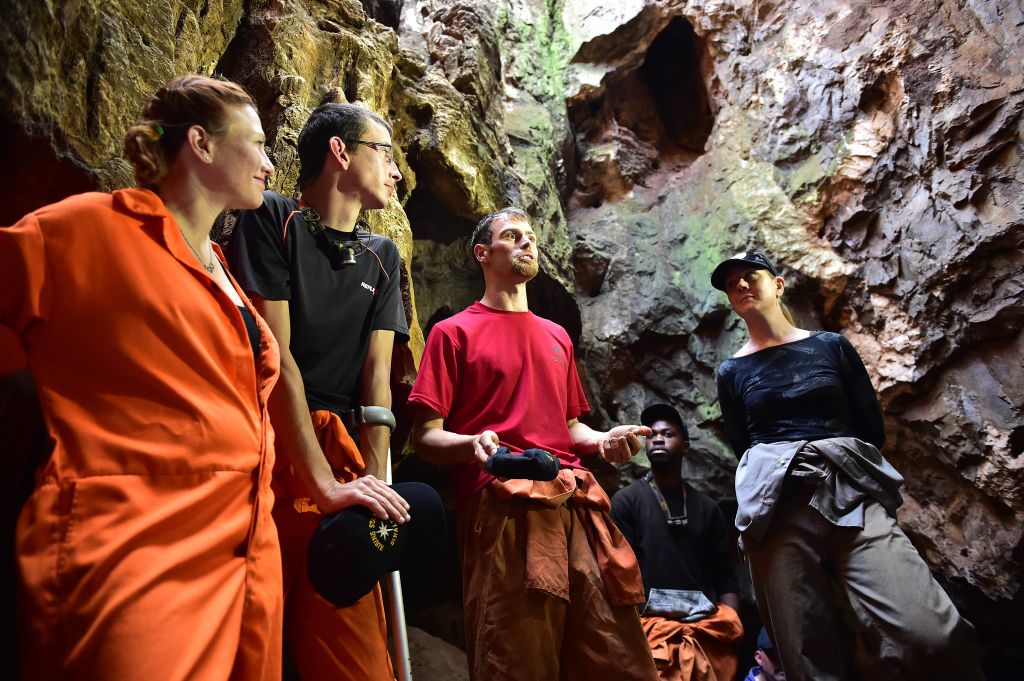 The team of 'underground astronauts' who recovered the now world-famous Homo naledi fossils.

Homo naledi has made headlines around the world as one of the most significant fossil discoveries ever made.

The unprecedented sample of fossils represents a rich record of an ancient population of human relatives, preserving nearly every part of the skeleton and spanning the lifespan.

Many people around the world have been following the compelling story of discovery from the first days of the excavation.

As our cavers and scientists worked underground in challenging conditions, we kept the world up to date on Twitter, Facebook and with our Rising Star Expedition blog.

Since those first days, the team has worked to build open access into every stage of the project. People can now share not only in the discovery but also in the process of understanding these ancient hominins.

After nearly two years of work, on September 10 we published our first scientific papers on this discovery in the journal eLIFE. These original scientific descriptions of these fossils and their geological context are free for anyone in the world to download and share.

In the week since we published these papers, the lead paper describing Homo naledi has been viewed more than 170,000 times – an extraordinary figure for any scientific paper.

Our team has also moved quickly to make our data available to anyone in the world. Many of our fossils are now represented by research-quality 3D scans on MorphoSource.

This online archive of data from skeletal and fossil discoveries, maintained by Duke University, provides a way to share large data sets both for scientific work and teaching.

Our team has generated virtual reams of scans that enable anyone to visualise these fossils, and even to use 3D printing technology to create their own physical copies.

Right now, teachers and researchers all around the world are printing 3D models of the fossils of Homo naledi. Kristina Killgrove, a leader in applying 3D printing technology in her anthropology classroom, wrote:

I downloaded the model as an .STL file…and then printed it using my trusty old MakerBot. It took 20 minutes, tops. Then I gave the model to a grad student who was heading in to teach the undergraduate lab in biological anthropology. Bam! Species-announcement-to-teaching-cast in under 12 hours.

In the first week after the announcement, more than 1700 copies of these data sets have been downloaded, with makers proudly showing off their printed models on Facebook and Twitter.

Paleoanthropology has often been caricatured as the lone pursuit of fossils by Indiana-Jones-like characters. But in the 21st century, making new discoveries in paleoanthropology – as in all other areas of science – requires collaboration across many disciplines.

This project has involved a team of more than 60 scientists, each bringing their own distinctive expertise and data sets together to help solve the problems posed by these fossils.

The project is led from South Africa and stretches across international boundaries to impact the world.

At the event announcing Homo naledi at Maropeng, the Vice-Chancellor of the University of the Witwatersrand, Adam Habib, remarked on the importance of open access for building a 21st century science:

We often talk about science as having no boundaries, but in our world scientific knowledge has become commodified, and too often, what should be the bequest of the world, the bequest of a common humanity, is locked up under paywalls that postgraduate students and researchers cannot get access to. So what we did when we made this discovery, was we put cameras in the cave, and we streamed it live from day one.

We partnered with eLIFE, an open access journal, to make sure that the discovery was available to all of humanity. And what we did in that practice, is create the first elements of a common global academy….We are not simply going to be beneficiaries of open access, but we are going to be contributors to open access, to the knowledge of a common humanity.

eLIFE editor Randy Schekman wrote about the benefits of open access publishing in 2013 when he won the Nobel Prize. His article, entitled How to break free from the stifling grip of luxury journals, emphasised that by limiting access to publishing, traditional journals create artificial scarcity to distort the process of scientific communication. Open access makes for better science.

The open access philosophy has driven our work on Homo naledi from the beginning. Instead of keeping these discoveries veiled behind locked doors, we have tried to bring them to the public in ways that will drive greater curiosity and engagement with science.

We are proud to be able to share the original fossils with the public at Maropeng, where they will be on display until October 11.

Not only the public benefits from scientific open access; science itself benefits. Showing the process of science in action, we create better tools for educators to equip students with the scientific method.

As we train a new generation of scientists, we must give them the tools to build collaborations and work with massive data. By sharing data openly, we build a worldwide community of practice as we attempt to understand this and other future discoveries.

This article was originally published on The Conversation. Read the original article.