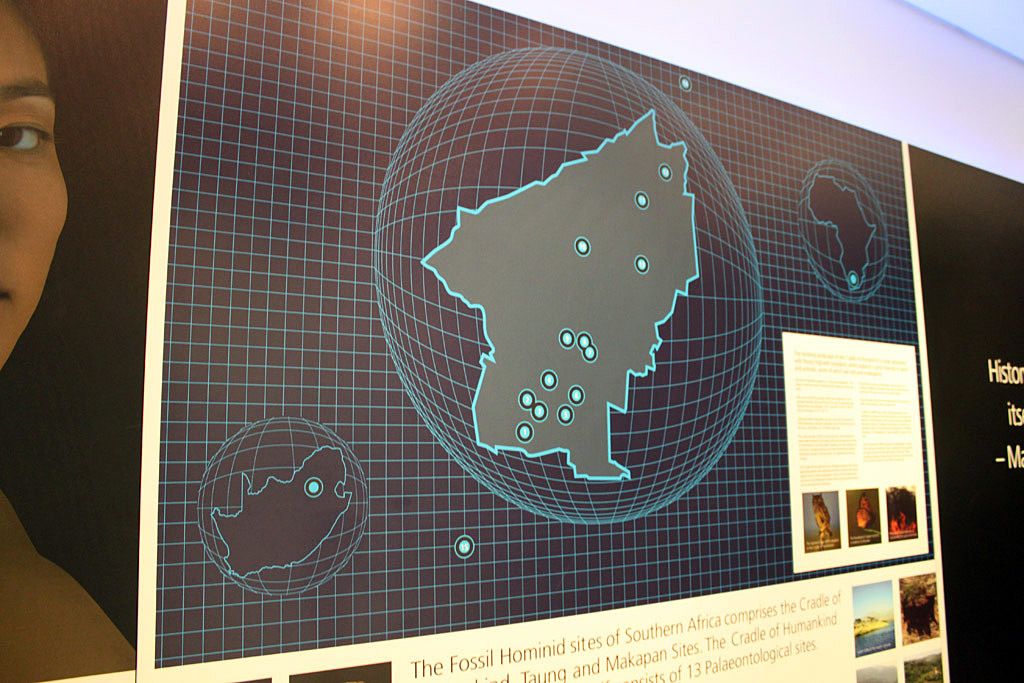 A map detailing fossil sites in the Cradle of Humankind

The search for fossils begins with geological surveys. Some areas are more likely to yield fossils than others, and researchers normally concentrate their efforts on regions that have good, fossil-bearing rock such as the dolomitic limestone of the Cradle of Humankind and the ancient lake beds of East Africa.

But a good measure of luck is also needed sometimes, as was the case in many of the Cradle of Humankind sites, which were first explored by miners.

Hundreds of palaeontological sites in South Africa have been exposed by miners. But sadly, many have been destroyed in the mining process.

When a potential site is identified, it is surveyed using technology that produces three-dimensional maps and plans of potential fossil-bearing areas. Finds are plotted on virtual maps using a digital Geographical Information System (GIS). 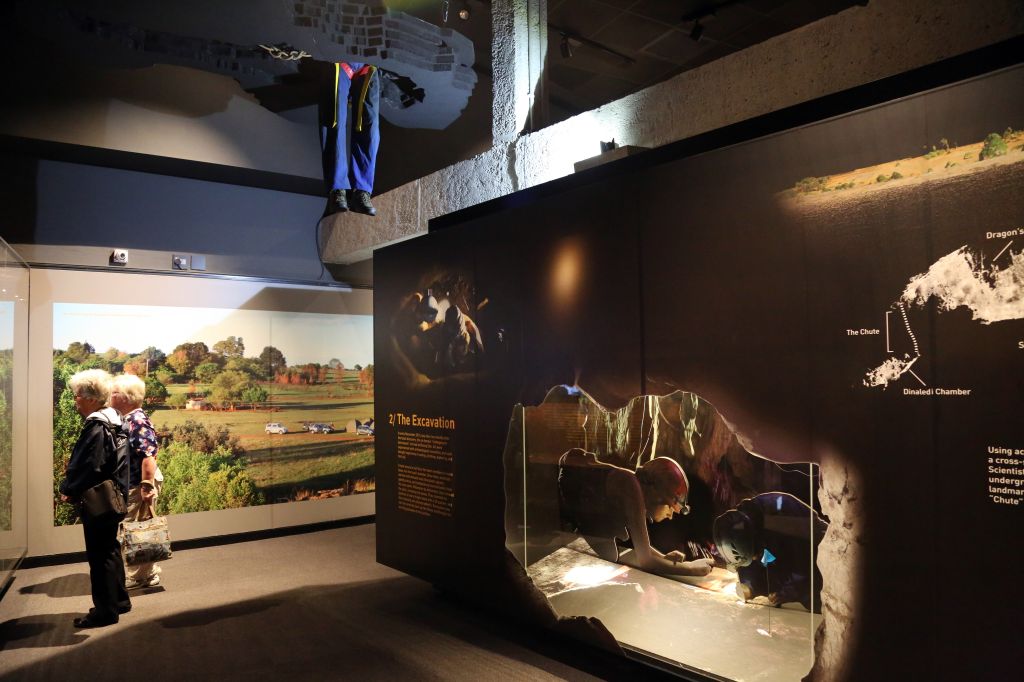 The type of excavation method used depends on the type of sediment, or matrix, holding the fossils.

At Sterkfontein, many of the fossils are encased in hard breccia, a matrix consisting of mud or sand and stone fragments cemented together by calcium carbonate. This breccia is excavated using jackhammer drills driven by compressed air. Blocks are then broken away by driving wedges into the holes.

Technicians carefully uncover fossils from breccia blocks by removing the surrounding rock using delicate drills, including power tools called airscribes, which use compressed air. Little Foot is being excavated in this way.

Areas of decalcified breccia deposits (i.e. where the lime has been dissolved by ground water) are excavated with picks and shovels and carefully sieved so that even small bones of rodents, insectivores, bats, lizards, frogs and birds can be recovered. Fragmented and crushed fossils can be reconstructed after cleaning.

Jackhammers, crowbars and sledgehammers are used to remove dolomite and layers of calcium carbonate to expose cave breccia when there is no chance of damaging fossils.

Blocks of breccia can be removed for preparation in a laboratory. Prior to removal, the position of each block of breccia is recorded in three dimensions, relative to a grid or digital 3D site plan.

Technicians carefully remove fossils from the breccia. Fossils can be prepared in a laboratory using small, pointed chisels and lightweight hammers. Fine cleaning of important fossils is done under a microscope with dental picks and airscribes.

Fossilised remains, including microfauna (the bones of small mammals and bats), can be released from hard, calcified breccia by carefully soaking chunks in baths of weak acetic acid. This dissolves the calcium carbonate matrix holding the delicate fossils.

Specimens are numbered and catalogued with reference to their position vertically and horizontally in the site. Photography and making drawings of stratigraphic sections are important activities during the excavation.

After a fossil has been prepared and cleaned, it is studied in the laboratory.

There are many ways of examining fossils in detail. Significant fossils can be measured using callipers.

Binocular light microscopes are used to look at surface features of bones.

These can show cut marks or carnivore damage. A scanning electron microscope (SEM) is used for detailed, high magnification analysis, for example, to study microwear on teeth, yielding data on diet.

Trace element and isotope analysis of soils and fossils provides information about the environment.

Isotope analysis of tooth enamel can also indicate the diets of animals that lived millions of years ago.

DNA analysis has the potential to add information on the nature of relationships between animals.

Scientific techniques: At the cutting edge

Researchers are able to get a rough time-frame for fossils by relating them to the rock layers (stratigraphic sequences) in which they are found.

Where fossils are found in association with volcanic ash deposits, as they are at East African sites, their age can be determined using potassium-argon dating. This method is based on the fact that after volcanic rock cools some of the radioactive isotope potassium-40 (K-40) decays to the gas argon-40 (Ar-40), which is then trapped within the rock. By measuring the proportion of K-40 relative to trapped Ar-40 in a sample, the date when the rock cooled can be established.

Uranium Series Dating is also based on the decay of radioactive isotopes, in this case by measuring the proportions of uranium to lead or uranium to helium in an ancient sample.

Electron Spin Resonance (ESR) dating is based on natural radioactivity. By measuring the build-up of electrons trapped inside crystals after they were formed, fragments of tooth enamel can be dated.

Cosmogenic dating is based on the finding that when cosmic rays from outer space reach the Earth they create cosmogenic isotopes. In quartz they produce measurable amounts of the isotopes beryllium-10 and aluminium-26. The relative proportions of these isotopes within buried rocks can be used to establish when they were last exposed to the atmosphere.

Radiocarbon dating is of limited value at the Cradle of Humankind since it cannot be applied reliably to samples that are older than about 50,000 years. This technique is based on the fact that all living organisms have a mixture of stable 12C and radioactive 14C isotopes (absorbed from the atmosphere). After death, organisms do not absorb 14C any longer, and the remaining radioactive isotopes decay at a known constant rate. By measuring the proportion of 14C relative to 12C in an ancient organic sample, it is possible to calculate its age.

Researchers can study the internal anatomy of fossils without damaging the material by using X-ray analysis (radiography).

CT scans (using computed tomography) provide detailed internal images of fossils. For example, CT images revealed that the roots of the wisdom teeth of “Mrs Ples” were still open at the time of death, indicating that this individual was probably an adolescent.

Taphonomy is the study of processes which relate to the death of organisms, their burial and decay. It is important to understand these to interpret fossil sites correctly.

Bones were once parts of living animals. After an animal dies, it naturally decays where it is buried. Taphonomy includes the investigation of things like the age of the individuals which the bones once belonged to, and how weathering has affected them.

Dr Bob Brain, a zoologist at the Transvaal Museum, undertook pioneering taphonomic work on fossils at Swartkrans in the Cradle of Humankind. At issue was an idea developed by Professor Raymond Dart of the University of the Witwatersrand, who identified the Taung Skull, that the early hominids were ruthless hunters. In the course of examining nearly 240,000 fossils over 25 years, Brain hypothesised that some of the hominid and animal bones were food remains left by large cats. The early hominids were not the hunters, but the hunted!

Palaeoecology is the study of how organisms – including hominids – related with their environment in the past.

The proportions of species represented in a fossil assemblage may suggest much about the nature of past environments.

Of all the living primates, humans are said to be most similar to chimpanzees, in terms of DNA.

There are a number of ways in which modern primates can be studied to model the lives of extinct hominids. Researchers can study living apes and try to find behaviour that is also found in humans which might have been present in a common ancestor and/or early hominids.