A bronze sculpture of liberation hero Ahmed Kathrada has been unveiled as part of the Long March to Freedom open-air exhibition at Maropeng.

The life-sized bronze rendering of Kathrada has been placed among 100 sculptures of local heroes and global icons who inspired change over the course of 350 years of South Africa’s struggle history.

Struggle veterans Andrew Mlangeni, Frene Ginwala and Sophia Williams-de Bruyn unveiled the statue, remarking on how it so closely resembled their old friend, who passed away in 2017.

Standing beside the artwork, Mlangeni paid tribute to Kathrada, recalling how “Kathy” had refused to lobby for a lesser sentence than his co-accused in the infamous Rivonia Trial in 1963 and 1964. The trial saw several prominent leaders in the liberation movement, among them Nelson Mandela, receive life sentences to be served on Robben Island (a political prison for freedom fighters during the apartheid era).

“There was very little evidence against him,” Mlangeni remembered. “And lawyers wanted us to appeal because they thought Kathy and Raymond Mhlaba had a better chance of getting acquitted or getting a lesser sentence. Kathy said: ‘No! We are not going to appeal! If they say life imprisonment, we are prepared to serve that.’

“That was the kind of person he was. Always sacrificing for the sake of other people.” 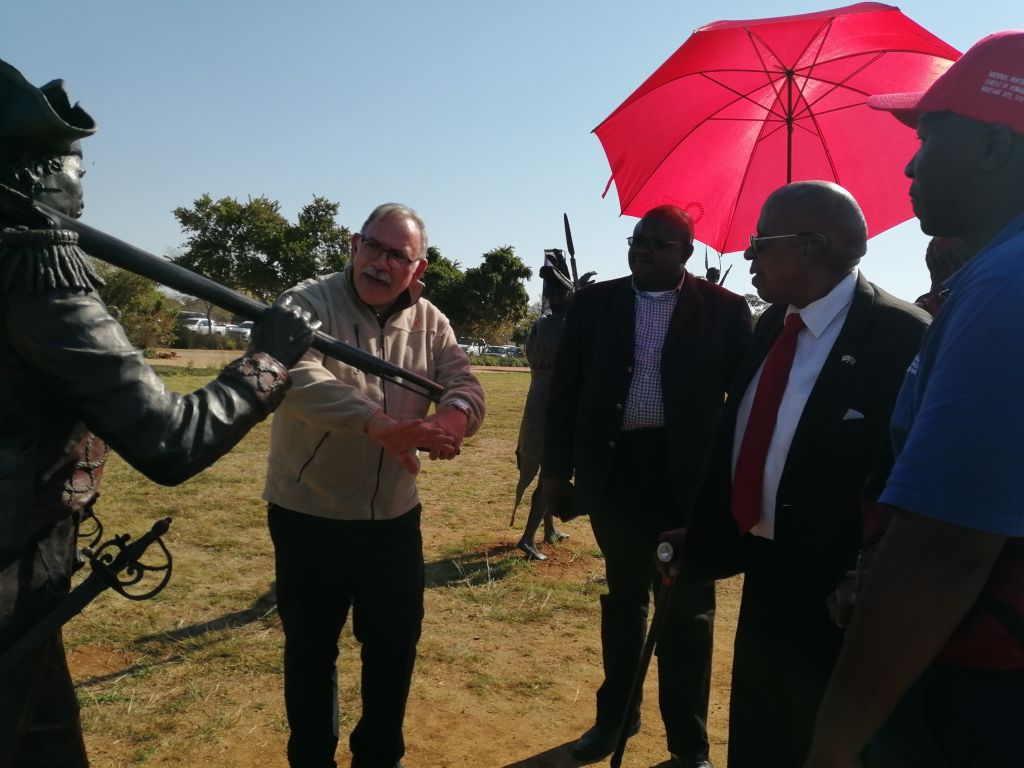 Maropeng MD Michael Worsnip tells struggle veteran Andrew Mlangeni about the painstaking detail that went into each sculpture in the Long March to Freedom. (Image: Maropeng)

Williams-de Bruyn remembered Kathrada’s exceptional leadership qualities. “We were the ‘young lions’ of the Fifties,” she said. “All of us younger ones were mentored by comrade Kathy. He taught us real values, and gave us the opportunity to know the congress movement. I am ever grateful for what I have learnt from him.”

Ginwala said it was Kathrada who had led her on her path to become a lawyer. She started working with him when he was rallying for support to prevent the apartheid government from forcing the Indian community in Johannesburg to move to Lenasia. The government did this, she said, by moving schools for Indian children to Lenasia, hoping that families would relocate there. Kathrada, instead, started organising the community to use local halls as schools.

“This was my political education. I learnt a lot, obviously. That started [prompting] me to say: ‘No, I’m not doing science any longer; I want to become a lawyer,’” Ginwala said.

All three praised the Long March to Freedom exhibition, marvelling at the attention to detail that had gone into painstakingly creating the sculptures. 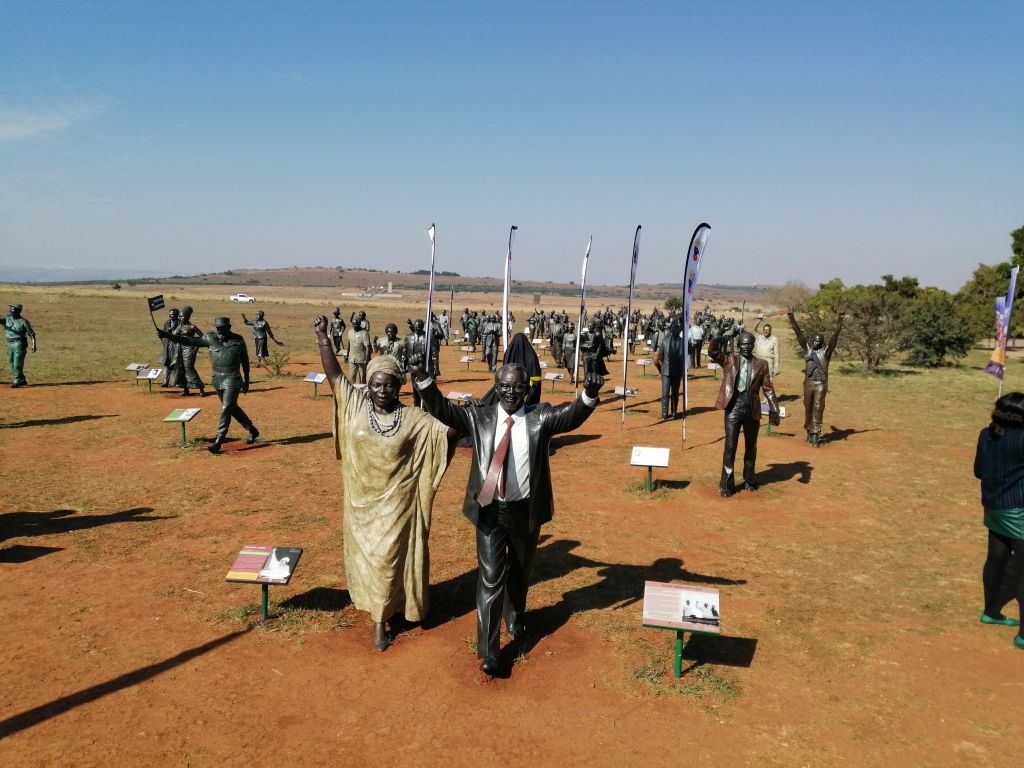 The Long March To Freedom exhibition is the largest exhibition of bronze sculptures in the world. (Image: Maropeng)

Dali Tambo, the founder of the group behind the exhibition, the National Heritage Project Company, says the aim is for the exhibition to eventually feature 400 sculptures. Speaking at the event, Tambo said South Africa’s heritage had the potential to fuel the economy, and to educate and inspire future generations.

“It is vital that our heritage packs a punch, that it is bold and spirited. It’s important that visitors leave our shores fulfilled and enriched by our culture and heritage. Let’s honour the fact that our forebears built the greatest international solidarity movement in human history,” he said.

The Kathrada Foundation’s Neeshan Balton said he felt both elated and sad on the occasion of the statue’s unveiling.

He said the Long March to Freedom exhibition had the potential to be a powerful learning tool for future generations.

“I think it’s wonderful. Many of the statues are so lifelike, it’s like a bronze equivalent of Madame Tussauds. If young people are brought here and taken through it and are told the stories, then it will be very powerful. If they just come here and take selfies, it would be wasted. It’s the storytelling that’s important.” 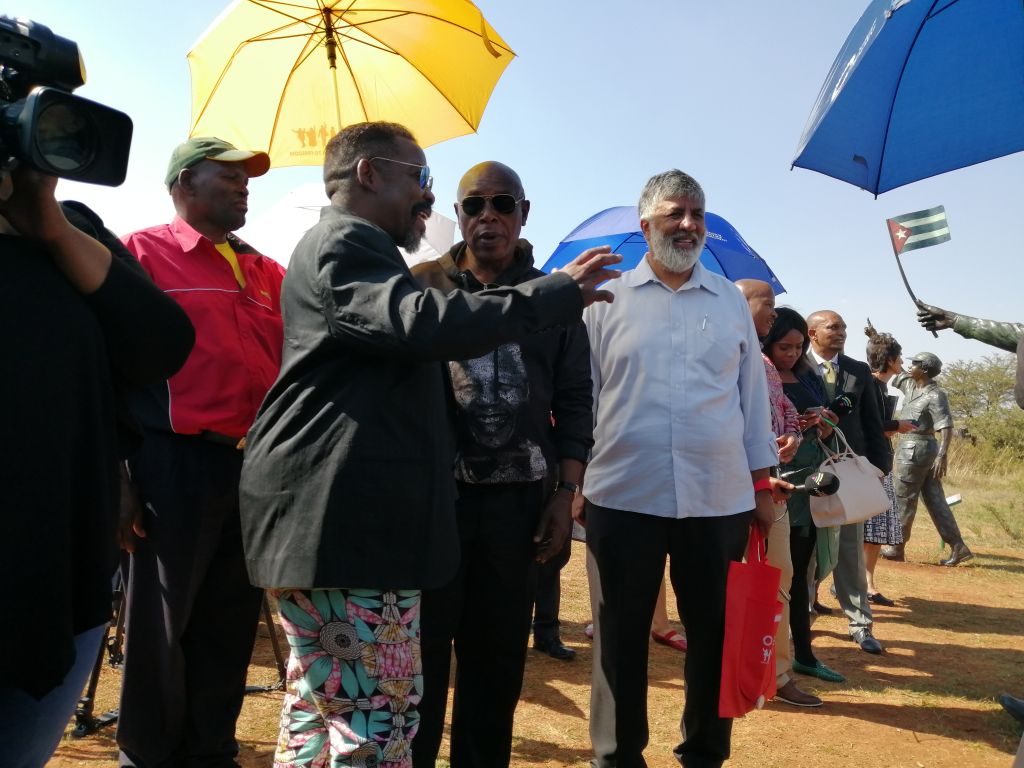 Speaking at the launch, Maropeng managing director Michael Worsnip and Tourism Minister Derek Hanekom both remarked on how Maropeng is the perfect place for an exhibition of this nature.

“This site was very well chosen. It tells us where we all come from: the story of our common ancestry and our common humanity,” Hanekom said.

Worsnip said Maropeng and the Cradle of Humankind collectively make a powerful statement against prejudice. “This place brings us a message – a clear message in rock-solid science: we are one species. We share a single genetic bond.”

Members of the public have free access to this open-air art exhibition, located opposite the Maropeng Visitor Centre’s main car park.