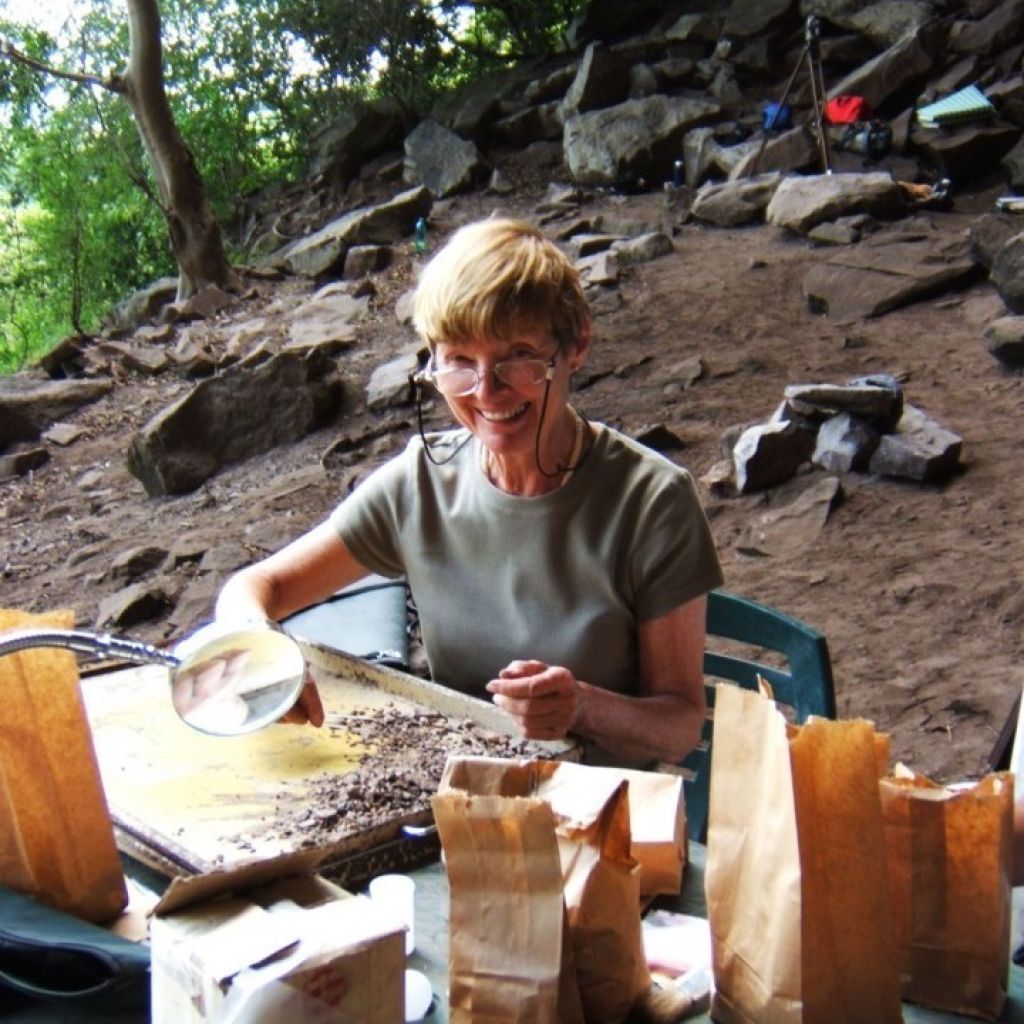 It is impossible to think about the past without using your imagination. Professor Lyn Wadley, an archaeologist, has spent years using hers and testing ideas in order to unlock secrets of the past.

For the past 14 years, Wadley has lead a team of archaeologists working at Sibudu rock shelter in KwaZulu-Natal where they uncovered new evidence that sheds light on early humans’ cognitive ability.

During the Middle Stone Age, 77,000 years ago, our human ancestors were smart enough to choose plants that contained insect repellant to sleep on. Fossilised grass stems and leaves, most likely originally from the uThongathi River near Sibudu, were possibly also used by humans to live and work on.

Finding the fossil plants, as well as perforated shells that were used as beads, have been major career highlights for Wadley. “Sibudu is only the second site in South Africa where these shells have been found,” she says. “The other is Blombos Cave in the Western Cape.”

Wadley’s work doesn’t stop at just leading the fossil site, she also tests the ideas proposed through practical experiments, a practice known as experimental archaeology. For example, traces of red ochre were found in old stone tools, where it was used in an adhesive to attach the handle. Wadley conducted experiments and mixed Acacia tree gum, beeswax and red ochre, and the result was the identical adhesive.

This experiment showed that modern humans 77,000 years ago were able to multi-task. “Looking at how red ochre was used, I initially thought this was simple technology implemented in a functional way, but when I began my test I realised it was a highly complicated process involving manipulating fire, and heating the materials that have different qualities at different temperatures.”

Archaeologist and co-researcher at the Sibudu cave shelter, Professor Marlize Lombard, says experimental archaeology is crucial in building theories that can be used to hypothesise about past technologies, “By trying to replicate certain technologies now, and understand what their application entails, archaeologists can gain some insight into the ways people were thinking and behaving in the past,” says Lombard.

Wadley grew up in Zimbabwe where she spent time travelling, visiting caves and looking at rocks. “This stimulated me to study archaeology,” says Wadley.

As a researcher Wadley has published more than 100 academic papers and has written extensively on gender and archaeology. “In terms of research, women are invisible in archaeological record,” says Wadley.

She explains that, with a large focus on big game hunting, this research only refers to men hunters. However, she said we needed to realise that women were just as empowered in the past. “The fossil record shows how early humans used snares to catch small animals, which were also an important source of protein. We know that this activity is something women are capable of, so they must have been involved.”

Wadley went on to become a professor in the Archaeology Department at Wits and, even though she is now officially retired, still supervises Ph.D students. With more than 30 years of teaching and lecturing experience, Wadley says that opportunities for women in archaeology have grown.

“In the mid 1980s and up until the 90s women were not on the same level as men in archaeology. Both publications and excavations were dominated by men.”

As principal investigator at 14 different fossil sites Wadley has pioneered the way for women archaeologists to follow in her footsteps. “I’ve really tried to nurture women and encourage them, to give them confidence. Most of my Ph.D students have been women and they have published extensively.”

Christine Sievers, a Ph.D student at Wits University, says working with Wadley at the Sibudu Cave shelter, and having her as a supervisor, has been wonderful. “Lyn is incredibly patient and generous with her time. She not only leads us in the academic writing process but gives us support and encouragement to publish and to present at conferences.”

Sievers says that their success in finding so much data at Sibudu, and being able to interpret it so well, is because Wadley has brought together a team of researchers from across the world. “Lyn has this analogy where she says we are all the threads in a tapestry and together we make a brighter picture, which has been a great project to be a part of.”

Lombard echoes this. “Lyn’s work ethic in the field is remarkable. Yet her soft-spoken and calm but assertive leadership combined with her passion for archaeology always brought out the best in everyone working at Sibudu. We shared many a chuckle because of her dry yet sharp sense of humour. And everyone who excavated with Lyn, at Sibudu or elsewhere, will tell you that her dinner menu is by far the best!”

Wadley is now retired and spends her time supervising Ph.D students and doing research, “There is still so much material from Sibudu and a lot of papers that need to be written about it,” she says.

As an only child she enjoyed to read, write and paint. Professor Robert Broom was an avid painter of landscapes and Professor Philip Tobias is also a writer. Wadley says that the interest of scientists in the creative arts is not surprising. “Science and art go together naturally. You need to use a lot of imagination to think about what happened in the past.”

Maropeng is thrilled to be exhibiting some of the fossils that Wadley and her team discovered at Sibudu, in a new fossil display, What makes us human: The significance of the Sibudu Cave shelter. These fossils will be on display until the end of May 2012.