Each year, millions of people around the world mark Remembrance Day on 11 November, in tribute to lives lost in World War I. In 2020, as we remember this time, we pay tribute to all who lost their lives, and are currently struggling, in conflicts all over the world.

South Africa’s own history means there are many old battlefields in areas across our country. Celebrated environmentalist and author Vincent Carruthers is producing a three-part series for Maropeng on old battlefield sites in the Cradle of Humankind. You can find the first instalment on the Battle of Dwarsvlei here.

Here’s the second instalment, on the Battle of Kalkheuwel … 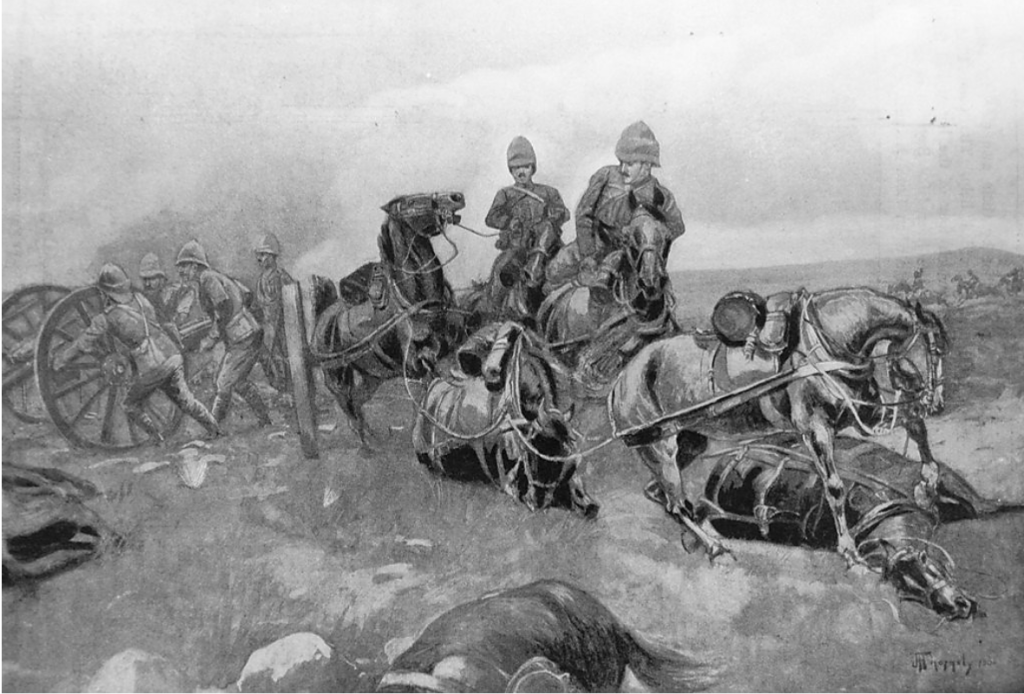 During the South African War in 1899, Boer farmers living in the region now known as the Cradle of Humankind joined the Krugersdorp Commando and helped to besiege Ladysmith. They were a long way from home and few of them suspected that the war would ever reach their own quiet Highveld farms. But in June the following year the tranquillity of the Cradle region was shattered, and the thunder of cannon reverberated from the cliffs of the Magaliesberg. Lord Roberts began his triumphal march to Pretoria.

With military bands playing and colours flying, the main body of the British army moved directly along the road from Johannesburg. At the same time, a powerful cavalry brigade of about 4 500 horsemen and several field guns encircled Pretoria from the west. They were led by Lieutenant-General Sir John French, the most senior cavalry officer in the British army. Fourteen years later, it was French who led the British army into France in World War I.

French’s column followed what is today the R512 past Lanseria Airport. After crossing the Crocodile River, the road twists through the Kalkheuwel hills, a high ridge honeycombed with lime mines and the dolomitic caves that make the World Heritage Site famous. A century ago this was a dangerous, narrow track flanked by rocky slopes. Here, a commando led by Sarel du Toit lay concealed among the rocks and shadows, planning to hold the British at bay for long enough to allow a Boer wagon train loaded with supplies and refugees to slip away safely to the north.

The cavalry advanced slowly and by the time it entered the Kalkheuwel pass, little more than an hour or two of daylight remained. As the vanguard reached the midpoint of the pass (near the modern Lion and Safari Park) Du Toit’s men opened fire at almost point-blank range. Two British soldiers were killed immediately, and another was mortally wounded. The leading troops tried to gallop back but were blocked in the narrow road by others pressing forward.

Further back, the horses were unable to pull the guns over the rough terrain. They suffered dreadfully as the gunners tried to drive them over the boulder-strewn landscape under fire. Eventually the gun carriages were uncoupled and the men dragged the guns into position themselves.

Shells and rifle fire poured into the valley. Dragoons dismounted and took cover behind their wounded horses. Soon “… the noise was deafening; guns, pom-poms, Mauser and our own fire – one continuous roar, echoed and re-echoed among the hills” (quoted from Morton’s Diary of the 8th Hussars).

For a while there was pandemonium until a troop of Australian mounted infantry stood their ground, and their example restored order to the panicking column.

Gradually the British regained the advantage, but Boer sniping and counter-fire continued and kept them pinned down throughout the night. Just before dawn the Boers retreated, leaving more than 20 men dead and several abandoned wagons. Losses on the British side had been remarkably light, but a terrible price had been paid by the horses.