If ever there was an exhibition to spark a child’s (and an adult’s) imagination about where we come from, it’s Almost Human, at the Maropeng Visitor Centre. 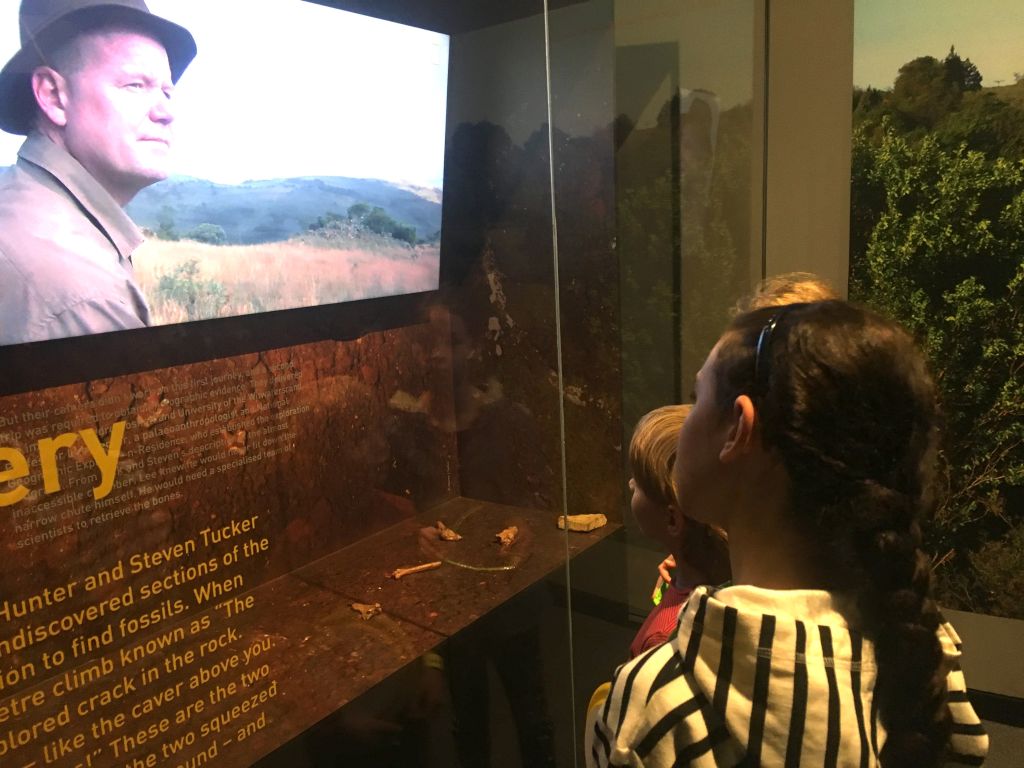 Lily's favourite bit: the video in which Professor Lee Berger (on the screen) and others tell the story of how Homo naledi was found. (Image: Maropeng)

In a compelling, interactive way, Almost Human explains one of the most important finds ever in the Cradle of Humankind, of Homo naledi, which is reshaping our understanding of hominin evolution.

Homo naledi represents a fascinating chapter in the story of hominin evolution. Much smaller than Homo sapiens, it had primitive features that it shared with some of the earliest known fossil members of our genus, such as Homo rudolfensis and Homo habilis, species that lived nearly two million years ago. On the other hand, however, it also shared some features with modern humans.

The discovery of Homo naledi is an Indiana Jones-style tale involving the finding of thousands of bone fossils deep inside an almost inaccessible cave, called Dinaledi, in the Rising Star cave system, and the incredible effort to get them out.

There are so many wonderful elements to the story, including the need for an all-female team (called the “underground astronauts”) small enough to fit through narrow gaps to get to the cave; of the sensational hypothesis that Homo naledi disposed of its dead in a deliberate way; and the discovery that the species was only a tenth of the age that it had initially been thought to be, raising the tantalising question: did Homo naledi and Homo sapiens co-exist, and interact?

Recently, the Homo naledi story took a fresh turn when another cave – more than 100m from Dinaledi – was found, containing several more remains. Among the fossils in this cave, named Lesedi, are an almost complete skull and the bones of a child. This fresh discovery bolsters the theory that Homo naledi purposely disposed of its dead, and confirms that the Dinaledi cave was no fluke.

I’m fascinated by the Homo naledi story (it certainly brings out the wide-eyed kid in me), and have been dying to view Almost Human – but the big question was, how would my nine-year-old daughter, Lily, find the exhibition? Would I have to drag a bored child around with me, while I tried to make the most of it?

Lily also loved the fact that all the bones on display are the real thing, and not reproductions. (Image: Maropeng)

As it turns out, my worry was unfounded: she was simply absorbed by it.

From watching a compelling video featuring Rising Star exhibition leader Professor Lee Berger and the two men who first discovered Dinaledi, to (repeatedly) squeezing through a model of the cave’s tight entrance, to viewing the bones found in the cave, the story of Homo naledi came alive as much for Lily as it did for me.

Her assessment afterwards of the Almost Human exhibition?

“I think it was very interesting, because there were real bones there,” she states – the fact that the actual bones are on display, and not reproductions, was significant for her.

Lily adds: “My favourite part was that we got to see a video of how they found the bones – and it was really cool that it was a team of girls who got them out.”

The beauty of the Almost Human exhibition, says its curator, Lindsay Marshall, is that it is something the whole family can enjoy together.

“The exhibition goes way beyond the filling in of a gap in the story of hominin evolution; it is the telling of an adventure story that is almost unparalleled in palaeo-anthropology, and combines discovery, danger and fine detective work.

“We show how Homo naledi was found, what it took to get the bones out, how and why certain deductions about the species have been made, and we present the genuine evidence – all in a way that both adults and children will be captivated,” says Marshall.

Lily reads about one of the most compelling aspects of the discovery: that Homo naledi deliberately disposed of its dead. (Image: Maropeng)

Of course, there was no way I was going to take Lily to Maropeng without her also getting to do her favourite things there, such as the underground boat ride and the static exhibition – where she called up extinct animals, explored DNA, got to touch a fossil and learned about our planet’s evolution, among other activities.

We’re privileged to have the Cradle of Humankind on our doorstep. Even more of a privilege, perhaps, is having the opportunity to experience the groundbreaking work being done there in ways that delight young and old alike.